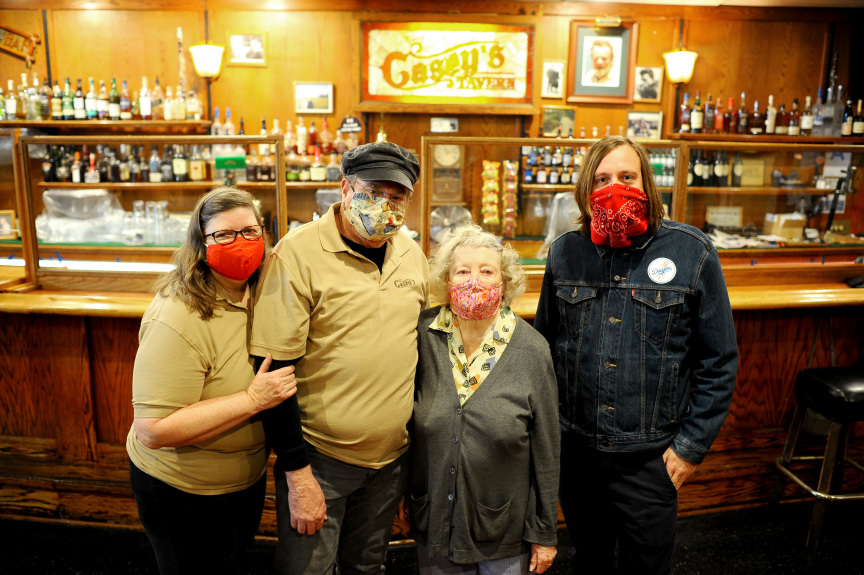 “Lee wanted a place you could take your mother, sister, or grandmother to and feel comfortable.” –– Jean Casey, owner of Casey’s Tavern.

Before he died in 2004, Lee Casey put enough money in the safe of his Canoga Park tavern to pay the rent and overhead through the lean years so his wife, Jean, would not have to worry about keeping the doors open.

He could never have imagined there would be one year so lean it would almost empty the entire safe.

It’s been 10 months since Jean Casey has put $1 of profit in the till and no one can tell her when she’s going to be able to open the doors again. Only the pandemic holds that key.

She’s 93 now and worried about making the rent every month just to hang on, like so many mom and pop owners of businesses deemed nonessential. She’d been turned down for a Paycheck Protection Payment loan from the government, but she did get a surprise stimulus package last week from a group of people who find Casey’s very essential — her steady customers.

They chipped in and sent $12,000 in just one week to a Go Fund Me account made necessary when the PPP loans were denied and her safe was just about empty. She was amazed, Jean says, when the checks for $50, $100, even $200 started coming in for services she never had a chance to render last year. Her regulars didn’t care.

“Let’s give a dollar for every great evening of jazz that Lee and Jean have given us over the years,” wrote Mitch Reed on gofundme.com/f/help-caseys-tavern after learning of the hardships Jean was facing.

“There will be no return to normalcy in the Valley without Casey’s reopening.”

Forty years ago, Lee sank their entire life savings into an old, rundown, western bar on Sherman Way. He transformed it into a live jazz venue filled with laughter and friendship.

Casey’s became a neighborhood institution where you could bring your mother, sister, or grandmother, and feel comfortable.

Lee opened the doors and laid down the law. There’d be no swearing in Casey’s and no young guns allowed in wearing their baseball caps on backward because that was copping an attitude, and he hated guys with attitudes.

His bartenders, war veterans like himself, politely asked them to turn those caps around or leave. Negotiation wasn’t an option.

They never served food, but they were more than happy if you walked in for lunch or dinner with a pizza from Jerry’s Pizzeria a few doors away, or some cannolis from Cavaretta’s Italian Deli down the block.

Jean opened every morning at 9:30 a.m. to get the day started, and then returned for jazz nights three days a week, sitting at her favorite table in the back, by the lending library, holding court.

Greeting new customers, and asking old ones how their families were doing? If there was anything she could help them with, just ask. Her kindness didn’t go unnoticed.

When Lee died, there wasn’t a seat to be had inside Casey’s for his celebration of life memorial. Now, it was their customers turn to ask Jean if she needed anything, just ask.

No, Mrs. Casey shouldn’t have been amazed or surprised by the stimulus checks that came in for her this week. They were a gift for all those nights of great jazz and friendship — a down payment for when normalcy returns to the Valley and she can open the doors to Casey’s Tavern again.