Outdoor dining at the Commons in Calabasas – 2 delicious options 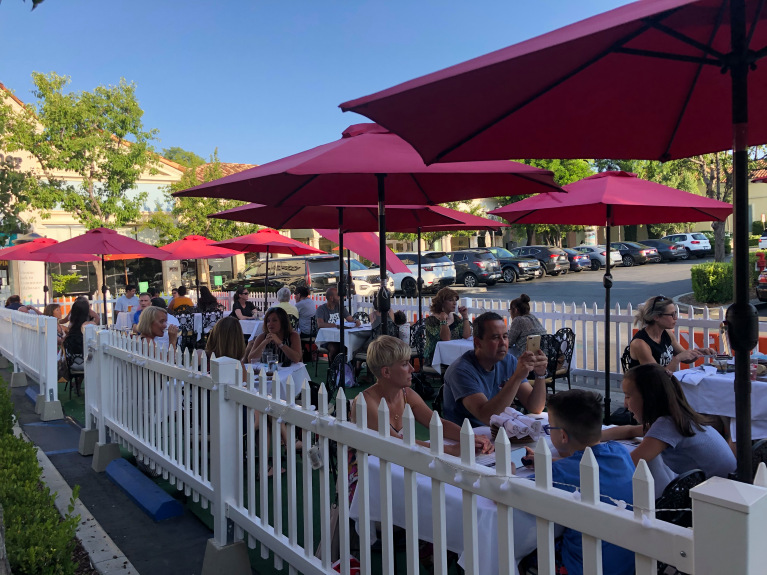 In Old Pasadena, Colorado Boulevard has been turned into an outdoor dining mall. In the South Bay, it’s Catalina Avenue in Redondo Beach and Sartori Avenue in Torrance. In Long Beach, it’s 2nd Street in Belmont Shore. And in the San Fernando Valley, it’s the outdoor malls are where we go for outdoor mall chow — in particular, the Commons in Calabasas, which is bookended by a pair of excellent outdoor choices. With proper social distancing — and servers in masks and shields. And thank you for that.

At Toscanova (4799 Commons Way, Calabasas; 818-225-0499, https://calabasas.toscanova.com), those servers are in a state of perpetual motion, barely pausing at each table to take an order, before hustling off to the bar for drinks, and the kitchen for plates of pasta and much, much more. Beginning with a long list of appetizer salads, seafood apps, meat apps, cheeses, cured meats and pizza, you could have quite a meal at Toscanova without ever getting to the pastas or the entrees.

The cooking is classic Italian; if there were shopping malls in Florence, they’d have restaurants like Toscanova. (And give them time — the world is changing. Consider how Covent Garden in London is now a massive shopping mall. British…but a mall nonetheless.)

The 10 thin-crust pizzas are topped with traditional ingredients (ham, rapini, Parma prosciutto, fresh burrata, truffles, with nary a chunk of pineapple or barbecue chicken in sight). The cheeses and cured meats are almost all from Italy. And even though the Caesar salad is a local invention, served at Toscanova it seems Italian. I mean, Caesar was a Roman Emperor after all.

It’s a special pleasure to go to an Italian restaurant with nine proper salads to choose from. Not just some culinary oddity described as an “antipasto salad,” which seems to be a dumping ground for whatever is sitting around in the kitchen, growing old. But fine salads, made with beets, goat cheese and walnuts; with baby artichokes and frisee; with burrata mozzarella and eggplant.

There’s a very good, warm seafood salad over frisee, listed under the “Mare & Terra” set of appetizers, along with grilled octopus with fingerling potatoes; steamed mussels with ciabatta bread; and marinated artichokes with olives. You can call it a meal at that point.

But the baker’s dozen pastas do call out — along with the several extra pastas served as specials. The trio of risotti are properly prepared, with a fine texture, a good bite, and lots of mixed vegetables in the ortolana, wild mushrooms in the funghi, and shrimp in the scampi and asparagus. And the grilled filetto di manzo — filet mignon — was tender to the point of absurdity.

The motto of King’s Fish House (4798 Common Way, Calabasas, 818-225-1979, www.kingsfishhouse.com) is, “Welcome to the House That Seafood Built.” Which makes me want to pretend that King’s is near the ocean, though that will take a tad of imagination with the hills of West Valley around you. But within, the place is downright old school fish house, with a terrific Cajun oyster bar on one side, and with bottles of tasty Cajun Power Garlic Sauce on every table, allowing you to turn up the heat on the selection of nine carefully curated oysters (three Pacific, six Eastern) as much as you want.

This is a fish house that lives up to its name. I often find it hard to get past the first page of raw bar dishes, and small plates, both cold and hot. The wild lump crab meat cocktail is a pleasure, something that’s not a shrimp cocktail for a change. There’s a good ahi poke, made with yellowfin tuna because, these days, you’ve got to have a poke on the menu. The baked PEI blue mussels are about as good as mussels get. The crispy calamari crackles. The crab cakes are double sized. And as a counterpoint, it’s hard to resist the grilled Castroville artichoke; I have a thing for artichokes, which is strange, feeling passion for a thistle.

And of course, a fine meal could be had ordering the Hot Seafood Combo of shrimp taquitos, crab cakes, calamari and popcorn shrimp. Toss in some oysters, and you’re golden. But assuming more is needed for a proper night on the patio, with a cold Angel City Pilsner in hand, there’s a sushi menu, just to keep within the seafood uber alles theme — nigiri sushi, sashimi, a couple of carpaccios, and 14 rolls, including a lobster crunchy roll that’s a proper indulgence.

If it’s old school grilled fish that is needed to satisfy — well, there’s plenty, with 16 options on the menu, including just-in-season wild Puget Sound king salmon.

And if you add on the prepared dishes, there’s plenty more. I like my seafood qua seafood — which is to say, served as what it is. But I may be a minority report — looking around me, there are folks digging into the macadamia nut crusted wild Alaskan halibut with an orange-ginger butter sauce, the parmesan crusted wild Alaskan sand dabs with lemon butter and capers and more. There are pasta dishes too, and a bunch of steaks. Which brings us to the bottomline of King’s — it’s a fish house first and foremost, and a very fine one.

But the Kings understand that someone is going to come in, and order an herbed chicken breast with mashed potatoes. Or a perfectly decent cheeseburger with Swiss or cheddar. Like Bed Bath & Beyond, this is Fish Oysters & Beyond. As ever, you pays your money, and you takes your choice. Though, not to get the N’Awlins BBQ Shrimp, does seem a pity.