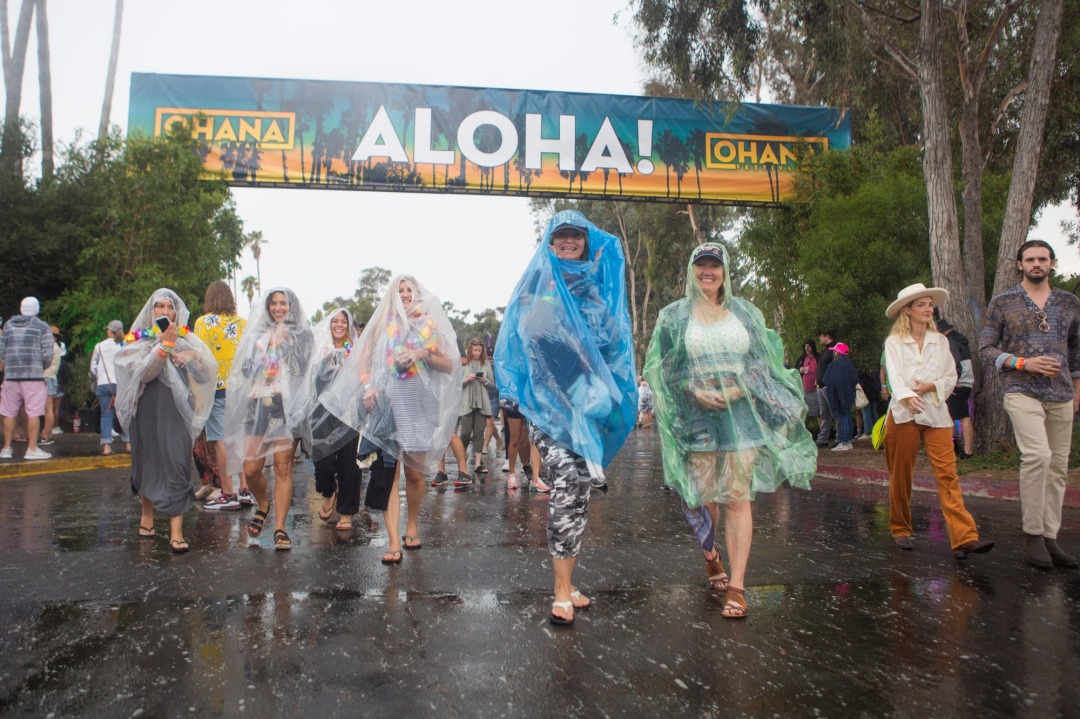 On Friday afternoon, as fans made their way into the fifth annual Ohana Festival at Doheny State Beach in Dana Point, the skies looked a bit ominous. Patrons on the event shuttle, which started in Aliso Viejo for the 20-minute ride to the venue, began checking their phones and texting others about the random bursts of rain hitting various parts of Southern California.

“It’s only a 40 percent chance,” one concertgoer announced as we exited the shuttle and headed toward the stages located on a sprawling grassy area among swaying palm trees and just steps from the Pacific Ocean. It seems every year during the Eddie Vedder-curated event, there’s a light sprinkle or some sort of rain in the forecast. In 2018, Vedder opened the fest by breaking out his ukulele and singing “Here Comes the Sun” as the storm clouds drifted away.

Perhaps the Pearl Jam frontman should have tried that magic again this year.

The early sets went off without a hitch as Los Angeles rock groups Modern Eyes and Amo Amo and Whittier punk band Plague Vendor got fans into a festival groove after more than a year off from live and in-person music events. But midway into Orange County rock band Greer’s set, lightning began to flash, the sky got darker and thunder started to rumble. As the music was abruptly cut and the band ushered off stage, large drops of rain began to pelt the crowd and there was an announcement over the PA that we were being evacuated due to inclement weather conditions.

Thousands of fans, many of whom did not park on-site due to limited availability, were told to return to their vehicles and await further instructions via social media channels. The wind picked up and thunder and lightning crashed as the sky began to dump heavy rain. Fans scrambled for any sort of shelter, some opting to hold onto their pricey cocktails and sip on them under the cover of palm trees in the parking lot. One festivalgoer was heard complaining that the rain was watering down her drink.

In all, the weather postponed the festival by about an hour and a half, and once the storm had rolled through it was back to the music. Sets were rearranged to accommodate all of the acts and the headliner, Vedder. He wasn’t originally scheduled to top the bill since he’s already doing so on Saturday and playing with Pearl Jam on Sunday. However, rock band Kings of Leon announced the day before that it had to cancel its festival appearance due to a family emergency back home in Tennessee. Betty Ann Murphy, the mother of bandmembers Caleb, Nathan and Jared Followill, died Friday evening following what the brothers referred to on social media as a “medical crisis.”

Vedder paid tribute to Kings of Leon and Murphy during his set by playing Pearl Jam’s “Long Road” and covering the band’s “Molly’s Chambers.” He told the audience that he had gotten the opportunity to meet her, adding: “You would know how magnificent she was by the young men she raised.”

Though he was a last-minute fill-in for the evening, Vedder brought out a mighty group of players on stage including Red Hot Chili Peppers drummer Chad Smith, guitarist and producer Andrew Watt, bassist Pino Palladino, vocalist-guitarist Glen Hansard and former RHCP guitarist and current Pearl Jam touring member, Josh Klinghoffer. It felt very loose and yet perfect. The band covered The Who and Prince with “I’m One” and “Purple Rain” respectively and rocked through Pearl Jam’s “Corduroy” and “Porch.” Vedder even debuted some new music including “Long Way” and “Tender Mercies.”

The extra time in the schedule went to My Morning Jacket, which played an incredible hour and a half long set that began with the moody “Victory Dance” and wrapped with the rousing “Wasted.” There were several highlights including vocalist Jim James howling into the night during “Circuital” and mixing up the delivery on “I’m Amazed” with guitarist Carl Broemel before the rest of the band kicked in.

During the fest, the audience got to hear two versions of Fleetwood Mac’s “Dreams.” Earlier in the day, Durand Jones & The Indications played the song as guests were welcomed back into the venue and they let the crowd loudly sing the “Thunder only happens when it’s raining” line. While its version was fun and funky, folk band Caamp’s rendition was stirring and absolutely beautiful.

Psychedelic and soul outfit Black Pumas set was a whirlwind of fun, but the crowd really got into its single, “Colors.” One of the real standouts of the day was The Regrettes, a punk rock band from Los Angeles led by the fearless Lydia Night.

“This is our first festival back,” she told the crowd. “I wanna see some dancing.”

Despite the dampness left behind by the rain, people danced as The Regrettes played a new song off its forthcoming album, “Monday,” which had dropped a day earlier, and had some fun with songs like “I Dare You” and “Picture Perfect.”