Mercado has yet another winner near Universal Studios 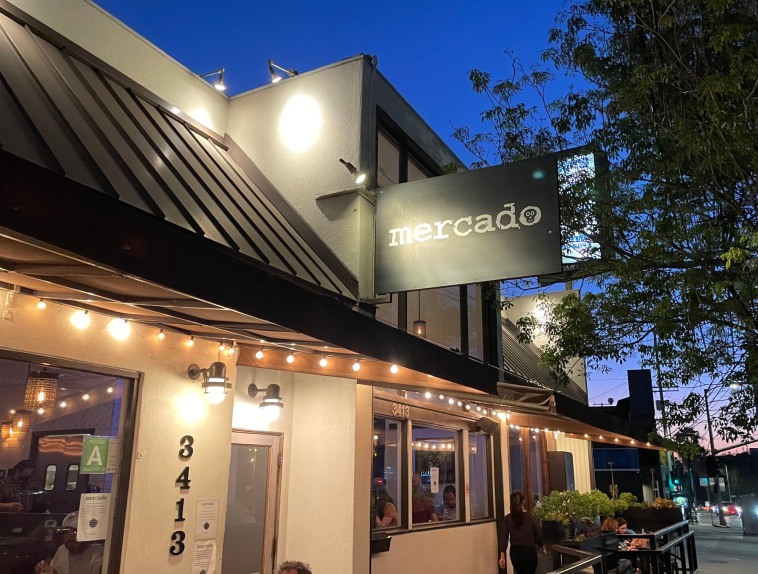 The restaurateurs at Cocinas y Calaveras refer to their Cahuenga Boulevard branch as Mercado Hollywood, which causes me some confusion.

It sits on Cahuenga near the entrance to Universal Studios. Which to my way of thinking makes this either Mercado Universal City, or Mercado Studio City. The map in my head has Hollywood beginning south of Barham Boulevard. And since this branch of Mercado is north of Barham, it’s not in Hollywood.

Though of course, in terms of marketing, it’s Mercado Hollywood that scans best. The Hollywood Bowl wouldn’t be as iconic, if it were called the Cahuenga Bowl.

But I quibble, which is in my job description. What I won’t quibble about is my fondness for the joyously morbid icons of Dia de los Muertos at the restaurants of Jesse Gomez’s Cocinas y Calaveras Group. You’ll find murals of happily grinning death heads at Yxta Cocina in Downtown, at Mercado in Pasadena, in Manhattan Beach, in Santa Monica and at Hollywood/Cahuenga, but without many of the traffic issues and parking impossibilities.

The sundry Mercados all share a common DNA — which is a DNA all their own. In the midst of the innumerable other Mexican restaurants in town, it stands out — and not just because of the happy skulls that appear adjacent to the kitchen, on the restaurant’s coasters, and even on the bathroom tiles. (To me, they say, “Enjoy…life is short…”)

This is a restaurant where cauliflower is roasted with chile morita marinade and pineapple, where the single salad is built around kale and arugula, with queso fresco, candied pepitas, pears, dried strawberries, cotija-pesto bread crumbs and agave-lime vinaigrette. Where the pork is sourced from Salmon Creek Farm in Twin Falls, Idaho. The beer list includes Border Psycho La Perversa IPA from Tijuana. You want Cidral Mundet Apple Soda, they got it. The dishes used are by Heath Ceramics. The menu proudly tells us so.

In terms of setup, Mercado has an outside patio in the front on Cahuenga that doesn’t seem like the place to sit, unless you’re especially worried about COVID. The busiest destination is the bar — long and very busy, with elbow benders sitting very close to together. It’s not a place to spend the evening if you’re not fully vaccinated.

The dining room is in segments, one up above the bar, another facing the bar, a third segment in a side room. They’re more or less spacious and more busy than not. For a restaurant whose logo is a smiling death’s head, the place doesn’t lie down on the job. No dead wood here. (For fans of the remarkable animated movie “Coco,” it’s a bit like the movie come to life!)

If you’re here to bend an elbow, there’s much elbow bending to be done. There are a dozen mezcals, and several dozen tequilas. There’s a margarita made with fresh hibiscus, a lovely touch, both tasty and aromatic. I like the twist that cucumber gives to the Spicy Cucumber Margarita, a gin ingredient used in a tequila drink. There are beers in bottles from Mexico, which is standard, and beer on draft from Mexico, which isn’t. There’s Mexican Coke and Mexican Sprite, both made with real sugar — a big deal these days.

But mostly, the pleasure of the Mercado on Cahuenga — and the Cocinas y Calaveras restaurants in general — is that they don’t feel like the same old same old. Though many of the classic elements are found on the menu, this is not a restaurant you go to for leaden combination platters of enchiladas and tamales, with rice and beans, hot tortillas served in a plastic container on the side. If it’s enchiladas you want, what you’ll get is a remarkable version of this old Mexican restaurant workhorse — packed with pulled Mary’s free-range chicken, flavored with a rich, dark Oaxacan mole, tarted up with queso fresco, crema fresca, red onion, and sesame seeds.

There’s Lela’s Mexican rice on the side — rice that’s actually worth eating. For a change.

If you want a sense of how good the chicken is, get the pollo en salsa de cuatro chiles with, of all things, mashed potatoes on the side. Very good mashed potatoes, that were actually made from real potatoes, and not some potato-like substance. There’s carne asada with cebollita onions, just like they serve at the fondas that surround the Plaza de Garibaldi in Mexico City. Only better. Though I do miss the competing mariachis.

The menu is configured so that meals of just appetizers can be perfectly satisfying — a dip combination of guacamole and choriqueso, skirt steak tacos, grilled fish tacos, pork al pastor tacos.

And yes, there’s guacamole, because you’ve got to have guacamole. I’ve rarely had a Mexican meal without guacamole. Here, it comes with serrano chiles, cilantro, tomatoes, red onions, salsa brava, spicy pepitas…and chips that are actually worth eating.

There’s also a brunch menu that features fantastic carnitas nachos, a monster breakfast burrito, chile verde with eggs over easy, plus carnitas for a little more. It’s a brunch that’s unique to Mercado, a Mexican restaurant with food that even makes the face of death smile. Especially after a margie or three.