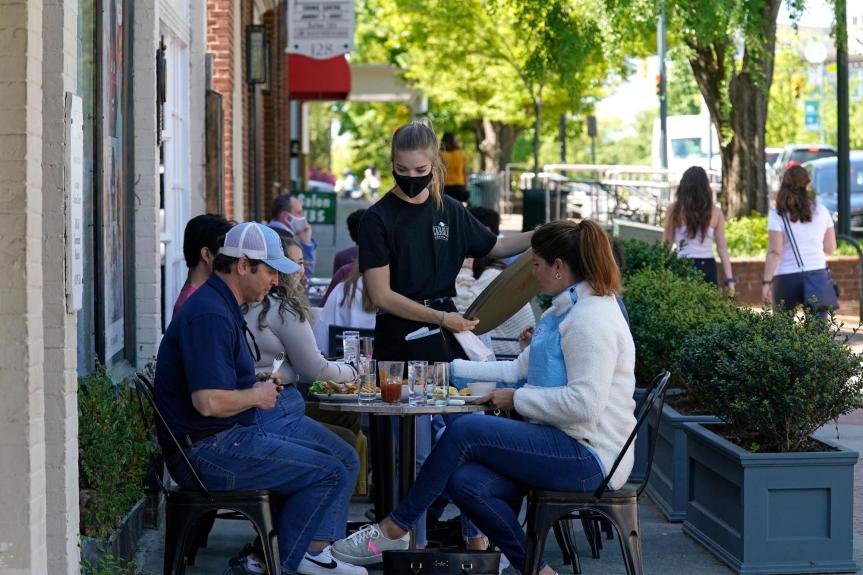 For restaurant and bar owner Camila Perry, New Year’s Eve has always been one of the busiest days of the winter holiday season.

“A lot of people are not coming because they are scared,” Perry said. “A lot of our regulars are getting sick.”

The sudden spike in new coronavirus cases has created havoc for many restaurants and bars, forcing business owners to scramble to replace sick staff and even temporarily close their doors to protect their patrons and employees.

Folks Pizzeria in Costa Mesa, for example, announced on Instagram on Thursday, Dec. 30, that it had to close that night because of a personnel shortage.

“Due to a staff shortage, we cannot execute service and must CLOSE tonight,” the restaurant’s post said. “This is a complex and difficult situation to navigate and we apologize for any inconvenience.”

Bill Matthews, chief operating officer at the Zislis Group — which operates the Shade hotels, Rock’N Fish, The Strand House and The Brews Halls in the South Bay — said there is a hyper-awareness about COVID-19 from customers and staff since the variant began spreading.

“Everybody’s really, I wouldn’t say panicking, although some people are very concerned,” Matthews said in a phone interview Thursday. “But I think people want to make sure that the workplaces are safe or the place they are choosing to dine is safe. And I think that’s been our foremost focus.”

Sales, Matthews said, are down — with business dealing with “a little bit of the omicron effect” — but the winter and recent inclement weather could be a factor in that as well. But, he added, the company has canceled, out of caution, two of its biggest events: New Year’s Eve at Shade Hotel in Redondo Beach and Manhattan Beach.

“Instead, we’re going to go ahead and do just dinner reservations; our tables are spaced out,” Matthews said. “We feel that it’s a safer way to go.”

Matthews also said his group consults with the LA County and state public health departments, and do not anticipate another shut-down.

If another shutdown did happen, he said, it would be “catastrophic” for small businesses.

“Another shutdown would be crazy hard for businesses of all sectors,” Matthews said. “Not just hospitality, but all businesses.”

Brent Reger, owner of Project Barley Brewery in Lomita, said his business has never fully recovered from its 15-month complete shutdown during the earlier days of the pandemic.

Project Barley, Reger said, was only open for about six months before the pandemic struck in early 2020.

“We haven’t been out of the woods, we’ve been for the most part limping along,” Reger said. “Our business is 100% people coming out; it’s not like we can pivot and suddenly have a different business model.”

Rising caseloads have taken a further toll on Reger’s business, he said.

“Even before this we weren’t up to 100%,” Reger said. “This just kind of made it start trending back towards how it was when we were struggling, not able even to cover rent and stuff like that. It’s been pretty brutal.”

Christy Caldwell, the owner of The Ordinarie in Long Beach, said he had to shut down the business completely because of the latest COVID-19 surge. Many of his staff members, who are fully vaccinated and boosted, have caught COVID-19 or been exposed to it.

“It’s not anything we really want to do, but I just don’t have enough healthy staff to do this,” Caldwell said. “We’ve been following protocols, wearing masks, doing everything we’re supposed to be doing, and I guess omicron is just where it is right now.”

Caldwell said he’s trying to stay positive about The Ordinarie’s future: Maybe, Caldwell said he hoped, this would be one of the last big surges in the pandemic. He plans to reopen next week.

“It would help get us through this if people started paying a little more attention to how we run, with masks and everything like that,” Caldwell said. “Just continue wearing masks and try to help us all get through this. Be mindful and considerate.”

Laurie Latham Brandt, co-owner of the Red Car Brewery & Restaurant in Torrance, said she’s also been dealing with staffing issues because of the omicron surge.

Over the holidays, several of Latham Brandt’s team members have been exposed to the coronavirus — and getting tested hasn’t been easy. One of her employees, Latham Brandt said, waited in line for six hours to have a test.

Red Car, because of the exposures, has opted to close down early for several days.

“We want to keep our team safe,” Latham Brandt said. “We’re just going to keep adjusting as we go.”

Latham Brandt added they might shut down again this Sunday to allow a sort of staff “reset,” as she put it — time to ensure every staff member gets tested and is healthy.

Not everyone, though, has yet to feel the impact of the coronavirus surge.

Brian Kelleher, co-owner of the Hook & Plow eateries in Hermosa Beach and Redondo Beach, said Thursday that his places have not seen a decline in business — and not a lot of concern from customers.

“We had a lot of support from the community,” he said about the first shutdown. “They were really going around wanting to support local restaurants and would do take-out or delivery. But when the second shutdown hit, I feel like everyone was, Hey, you know, we did our part supporting the first round. Now we got to kind of hunker down and take care of ourselves.’”

If there is another shutdown, Kelleher said, “I think it could be incredibly harmful to not only us but every restaurant in the South Bay.”

But the recent COVID-19 surge made her consider temporarily closing her North End bar in Hollywood until social activities begin picking up again.

“Sales are not covering payroll,” she said.

Her Sherman Oaks bar, however, will most likely stay open, Perry said, but she might have to cut her staff’s hours.

“A lot of people went out for Christmas and they are coming back expecting to make money and there might be no money to make,” she said. “We’ve been losing money by staying open.”