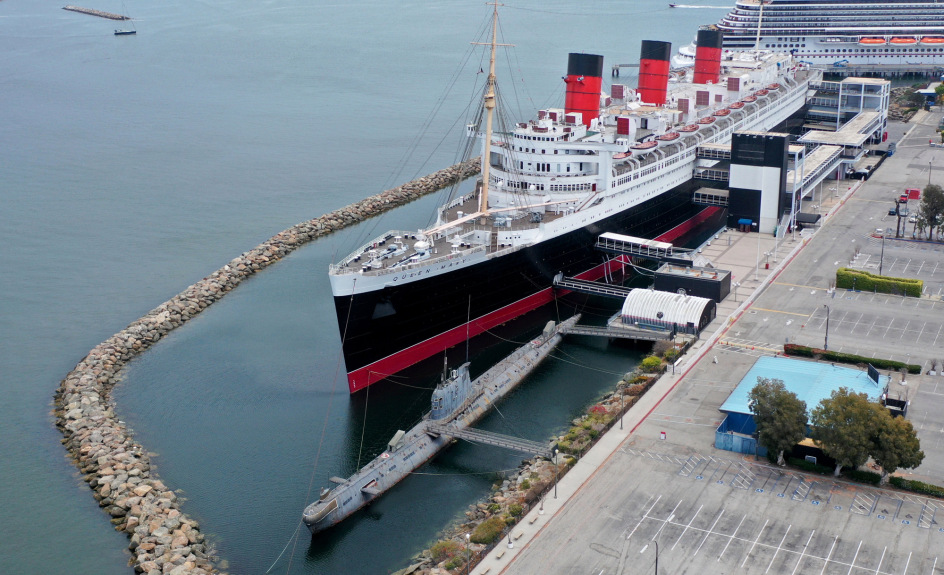 Long Beach has a range of options for the Queen Mary’s future — but all of them will be expensive.

That was the main takeaway of a study session the City Council held on Tuesday, July 20, on Long Beach’s potential next steps for managing the historic vessel.

Though most of those options involved disposing of the city-owned ocean liner, the City Council seemed united in its preference for preserving the Queen Mary — though council members and city officials all acknowledged that the best way to achieve that end is still unclear.

“It’s really nice to see that the city is putting the Queen Mary as a priority, coming up with a plan, coming up with some options for the city to do in the future,” City Auditor Laura Doud told the panel. “This is not an easy discussion to have. I know there are significant costs involved in all of the alternatives. I know you’ve all talked about that. You understand the gravity of it.”

Those costs, it seems, would top $100 million in every scenario — even if Long Beach chose to dispose of the ship. Moffatt & Nichol estimated that dismantling the ship, towing it elsewhere to be recycled or sinking it as a reef would each cost in the range of $105-to-190 million.

Not only would Long Beach have to pay those costs, City Manager Tom Modica said, but the city would also lose out on all the potential revenue the Queen Mary could generate in the years to come.

That was one significant reason council members said they were not on board with those options.

“I think most cities would die for an opportunity to have a ship like the Queen Mary,” said Councilmember Cindy Allen, whose Second District includes the ship, “that brings 1.6 million annual visitors — that’s an incredible number — and $94 million in economic impact.”

The options for preserving the Queen Mary, meanwhile, fell into two categories: preserving it in place, which would likely guarantee its future for another 25 years, and dry-docking the vessel, which would preserve it for 100 years or more.

Mayor Robert Garcia, though, noted that the one-time costs would not necessarily all need to be spent at once. Instead, some of the funds could be distributed over the lifetime of the preservation project.

“The numbers become, to me, less jarring,” he said, “when you know they’re being made over time.”

Still, the source of those funds remains unclear. Long Beach’s Tidelands Fund has supported the ship, and Councilmember Suzie Price said she was concerned pulling more money from that fund could impact other services along the city’s coastline.

“I want to make sure that the use of Tidelands funds for our short-term needs does not result in a reduction of our lifeguards, our police officers and our beach maintenance teams who work in the Tidelands area, whose salaries depend upon the Tidelands Fund,” she said. “That is a huge reduction of services.”

To prevent the Queen Mary from becoming a drain on that fund, Price said she hoped Long Beach would explore the idea of pushing for the ship to become a national monument, akin to the Statue of Liberty.

National monuments are operated and funded by the federal government, meaning if the Queen Mary received that designation, Long Beach would not be on the hook financially for maintaining the ship. But that designation can only be made by Congress or the President.

Modica, though, said his staff would get to work on researching the idea further.

“It’s likely a several-year process,” he said, “so I think if we’re interested, we should start now.”

Other ideas included incentivizing further development on and around the Queen Mary to bring in more revenue. Allen proposed a casino, for example, while Vice Mayor Rex Richardson said the city should think big, which would include bringing in more cruise lines but would also be broader in scope.

“I think we have to open up the playbook. We have to be open to all opportunities — sports, gaming, a theme park,” he said. “I really want to see some big ideas that are proportional to the problem here.”

Whichever direction the city takes, it will likely be in coordination with the Port of Long Beach and other city partners.

“This still has, I think, a lot of substantial review to go through,” Garcia said, “and I think requires a level of detail and hard work and coming together of the city, our Harbor Department and, of course, independent engineers and experts, to ensure we get all the information that is necessary as we move forward.”