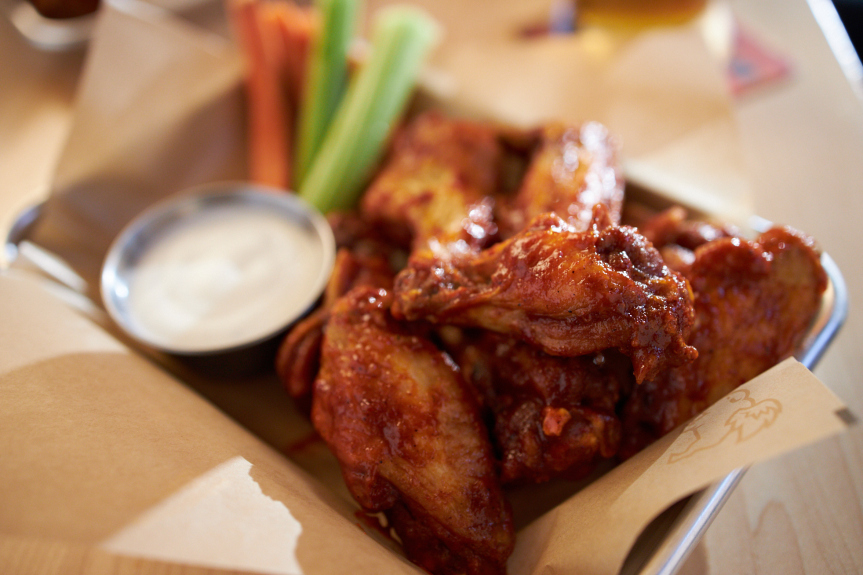 Super Bowl LV will be different this year, thanks to the novel coronavirus pandemic.

Some of the restaurant promotions look different, too. Wings are a given. There’s a prediction from the National Chicken Council that football fans will consume 1.42 billion of them on game day, Sunday, Feb. 7, as they watch the Kansas City Chiefs take on the Tampa Bay Buccaneers.

Fleming’s Prime Steakhouse & Wine Bar is pitching its catering menu for the game, and other chains have decided that their family packs, a COVID-19 dining trend, are appropriate for the big game.

Here’s a sampling of what’s being offered.

BJ’s Brewhouse: “Homegating Packs” include one large deep dish pizza; chips and choice of dip; choice of two appetizers; and a 64-ounce growler with beer or a non-alcoholic beverage for $64.95. bjsrestaurants.com

Black Angus Steakhouse: Game day-only offers include four cheeseburgers with fries, salad and eight chocolate chip cookies for $59.99. There is also a $29.99 Happy Hour To-Go pack with loaded potato skins, garlic bread, fried zucchini, a steak quesadilla, and choice of wine, beer or non-alcoholic beverages. A build-your-own feast that serves 10-12 includes options such as chipotle-Buffalo chicken tenders for $31.99 and four racks of baby back ribs for $99.99. blackangus.com

Buffalo Wild Wings: This promotion happens after the game. If it goes into overtime, everybody in United States and Canada and get six bone-in or boneless wings for free on Feb. 22 between 4-7 p.m. in whatever time zone they’re in. The offer is good for pickup or dine-in. buffalowildwings.com

Dickey’s Barbecue Pit: The Dallas-based chain is pushing ribs and wings for Super Bowl, but a spot check of its Southern California locations showed wings are not available. Ribs are available in six, 9, 12, 18 or 24 pieces at $15.50-$58. It sells several party packs with meats, sides, and rolls for $135-$155. And according to a news release, there’s a “Kids Eat Free Sunday” promotion good for one free kids meal with orders more than $10 and the code KEFOLO, dickeys.com

Dog Haus: The Pasadena-based chain will offer all-day happy hour, and select locations will be selling 30-wing packs for $62, including two sauces. Packs with 24 sliders are available with cheeseburgers, $44; pastrami, $52; and Impossible Burger, $68. doghaus.com

Fleming’s Prime Steakhouse & Wine Bar: The full-service restaurant chain is offering party packs on its catering menu that serve four to six people.  A three-course filet mignon menu includes six 8-ounce steaks with choice of a signature butter to top them with, salad, two sides and dessert for $360. Bone-in ribeye is $280 for four people and $390 for six. The catering menu also includes such sides and chipotle-cheddar mac & cheese serving 12 for $55. flemingssteakhouse.com

Ike’s Love & Sandwiches: App purchases of $20 or more get a $5 discount, according to a news release. loveandsandwiches.com

Smashburger: The Pulled Pork Tailgater Burger will cost $5 on Game Day, single patty only, according to a news release. smashburger.com

Yoshinoya Japanese Kitchen: Diners can order a $14.99 Combo Feast through the Yoshinoya app, according to a news release. It includes two combo bowls, four spring rolls and four boneless wings. Use the coupon code BIGGAME. yoshinoyaamerica.com