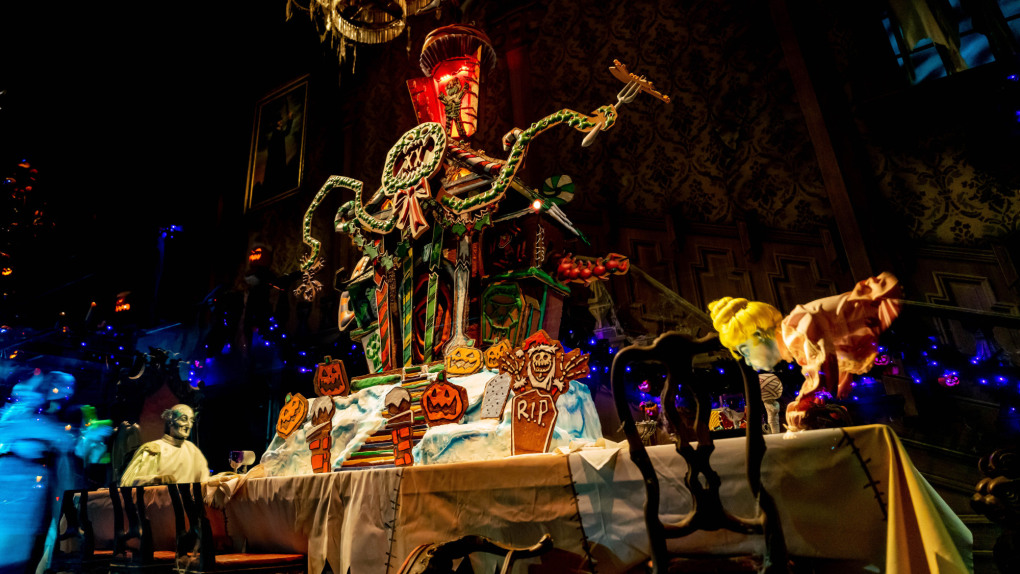 “It’s like I don’t even have complete control of this thing at all,” Disney Live Entertainment Associate Art Director Tim Wollweber said during an online video interview. “It becomes its own creature. Everybody joins in and it morphs into this cool thing.”

Disneyland’s Haunted Mansion will once again switch to “The Nightmare Before Christmas” theme during the holiday season from Friday, Sept. 3 until Jan. 9.

Disneyland’s creative team turned to a graveyard of 19 past gingerbread houses to dig up inspiration for this year’s Franken-house in honor of the 20th anniversary of the Haunted Mansion Holiday seasonal attraction.

“This has got to look pretty disparate like it came from a few different eras,” Wollweber said. “It felt like something that Jack Skellington and the Halloween Town folks would probably have literally dug up out of the graveyard at the end of Memory Lane.”

The gingerbread mansions at the Anaheim theme park grow more elaborate every year — with this year’s edition the tallest ever at 13 feet. The grand scale is essential since riders only see the confectionery creations for about 10 seconds from approximately 10 feet above the Haunted Mansion’s Grand Hall.

“The bigger and simpler the idea, the better it works,” Wollweber said. “As long as you can find those really fun holiday and nightmare ideas and put them together, they kind of almost top themselves.”

Wollweber, who has worked as a designer on Haunted Mansion Holiday since its inception in 2001, said planning for the next gingerbread house typically begins as the current one is being taken apart at the end of each holiday season.

As the holidays draw near, the Disneyland carpentry team spends a month building the modular framework for the gingerbread house.

“Usually these things are too big to actually make gingerbread stand under its own weight,” Wollweber said. “Our carpenters are geniuses. They know these things get big and they get heavy and they’ll make them modular.”

The Disneyland bakery team spends another month creating the edible edifice from 140 pounds of fondant, 120 pounds of frosting and icing, 75 pounds of confectioner’s sugar, 30 pounds of gingerbread and 3 gallons of egg whites.

Disneyland’s tech team is charged with disassembling, transporting and reassembling the gingerbread house in the Haunted Mansion’s Grand Hall — which can take two to three weeks.

“They take the house apart and bring it back into the mansion — and that’s no small feat in and of itself,” Wollweber said. “Not only do you have this big bulky thing, but you have to try to not damage it as much as you can because gingerbread can’t exactly take a hit.”

Animated effects on this year’s gingerbread house will feature moving arms, wiggling centipedes and snakes, opening doors and an iron maiden that lights up.

A gingerbread skeleton in a candy cane-spiked torture coffin from 2014 grimaces in agony near the top of the cookie mansion. The Haunted Mansion’s singing bust statues from 2019 dot a snow bank. A 2010 tribute to Sandy Claws pops up from behind a R.I.P. tombstone next to the front steps. Wollweber’s favorite element? The giant man-eating wreath from 2005.

Wollweber said the most challenging elements to incorporate into the 2021 gingerbread house were Zero’s dog house from 2004 and Jack Skellington’s house from 2012 — which were both very specific to the Tim Burton animated film.

Keen-eyed fans will want to look for double Xs incorporated into the design of the 2021 gingerbread house — a nod to the Roman numeral 20 and the Xs used by cartoonists to draw the eyes of characters who kick the bucket.

Scent-sensitive fans will notice the smell of fresh gingerbread wafting through the air as riders pass the Grand Hall scene in Haunted Mansion Holiday.

The annual gingerbread house is intended as a special treat for the ghosts who dance around the Haunted Mansion’s Grand Hall. It’s become a Haunted Mansion Holiday tradition to leave out a plate of shingle-shaped cookies for one particular spectral spirit that likes to swipe roofing tiles off of the gingerbread house. The plate of shingle cookies “disappears” every year.