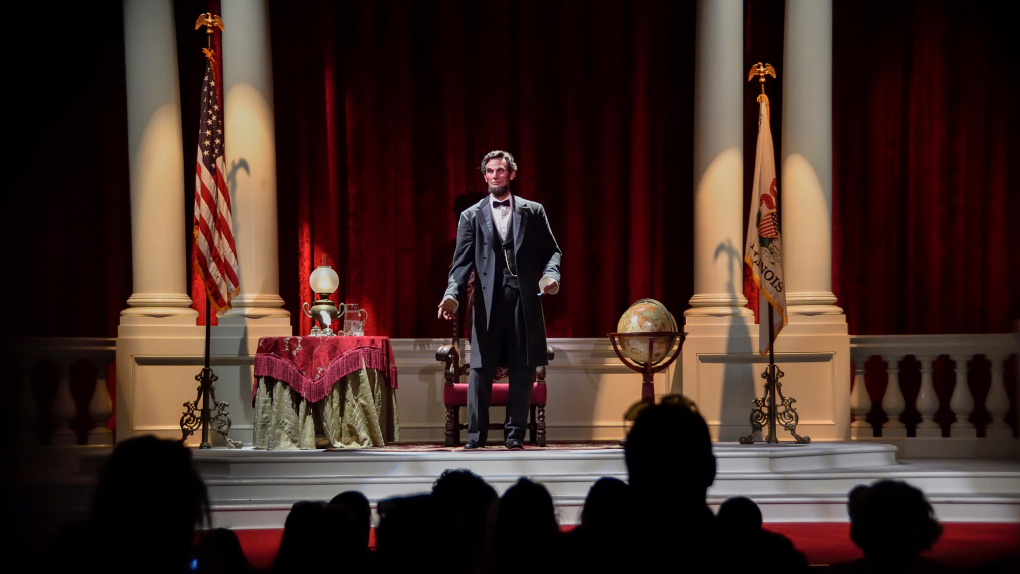 The Great Emancipator who has starred as an audio-animatronic historic figure in Great Moments with Mr. Lincoln for a half century at Disneyland got off to a rough start in 1964 when he would go crazy from power surges and smash his chair in a robotic fit.

“Mr. Lincoln would sit in this chair and he would start to get up and all of a sudden he would go into this robotic fit and fling his arms around,” Disney historian Bill Cotter said in a new Disney+ show. “He literally smashed his chair into kindling.”

Walt Disney Imagineering takes a behind-the-scenes look at Disneyland’s Great Moments with Mr. Lincoln in the new 10-episode Disney+ series “Behind the Attraction.”

“What Walt said was, ‘We have always tried to be guided by the basic idea that in the discovery of knowledge there is great entertainment, but in all good entertainment there is some grain of wisdom, humanity or enlightenment to be gained,’” Disney Imagineer Gary Landrum said in the upcoming “Behind the Attraction” episode.

Great Moments with Mr. Lincoln and the Hall of Presidents were inspired by a pavilion exhibit at the 1933 Chicago World’s Fair that displayed wax figures of all the U.S. presidents with recorded voice tracks explaining their roles in American history. Walt Disney thought he could bring the presidents to life with Imagineering’s burgeoning audio-animatronic technology in the 1960s.

The Hall of Presidents was originally planned for a Liberty Street expansion off Main Street U.S.A. in Disneyland, but the $4.4 million price tag to build animatronic figures of all the U.S. presidents proved too expensive. Disney decided to press forward with a show based around Lincoln.

“Walt was really upset,” Disney Legend Bob Gurr said in the Disney+ episode. “He showed us this Lincoln and it was very heavy and had hydraulic leaks in it. I remember he looked at this thing and he says, ‘Bobby, I want twice as many motions and half as much weight. Can you do that?’ It was obviously another one of the jobs where you say, ‘Yeah, I’ll start.’”

Disney signed an agreement to create a Lincoln animatronic as the centerpiece attraction in the Illinois state pavilion at the 1964-65 New York World’s Fair. Despite tireless efforts, the Lincoln animatronic was not ready for opening day of the fair.

Imagineers could not get the Lincoln animatronic to move through its programming successfully. Honest Abe kept throwing robotic fits — flailing his arms and smashing his chair to bits. The Imagineers were at a loss for solutions.

“They would go and get him another chair and he worked two or three days in a row,” Cotter said in the Disney+ episode. “They would bring the press and he’d stand up and smash the chair into kindling.”

Finally, the Imagineers figured out the problem. A nearby World’s Fair pavilion called the Tower of Light was shining a giant beam into the sky. The powerful light beam was creating an electronic anomaly that caused the Lincoln animatronic to “go crazy.”

“When they fired this thing up the transient circuits that would go through the ground made Mr. Lincoln get feedback and he’d go crazy and smash his chair,” Cotter said in the episode.

The debugged Lincoln animatronic proved wildly popular among fairgoers, with a newspaper headline declaring: Blinkin’ Lincoln a Fair Wonder. Audience members were convinced the blinking, breathing and even perspiring Lincoln animatronic was an actor rather than a robotic machine.

“In all truth, he really did perspire because there was a migratory oil in the skin that came to the surface and we had to pat that off,” Disney Legend Harriet Burns said in the episode.

The Lincoln animatronic’s troubles weren’t over yet, though. Mischievous children came up with a sure-fire way to prove Robot Abe was a real person. Kids began firing ball bearings through soda straws like spit wads during the show — gathering their ammunition from the free samples handed out at the nearby SFK Industries pavilion.

“People would go into Mr. Lincoln and start shooting Mr. Lincoln with the ball bearings,” Cotter said in the episode. “He’d get one in his cheek and it would stay there for the rest of the show.”

After the New York World’s Fair, Great Moments with Mr. Lincoln was brought back to the Opera House at Disneyland. Imagineering eventually built Liberty Street — which became Liberty Square when the Magic Kingdom opened in 1971 complete with a Hall of Presidents.