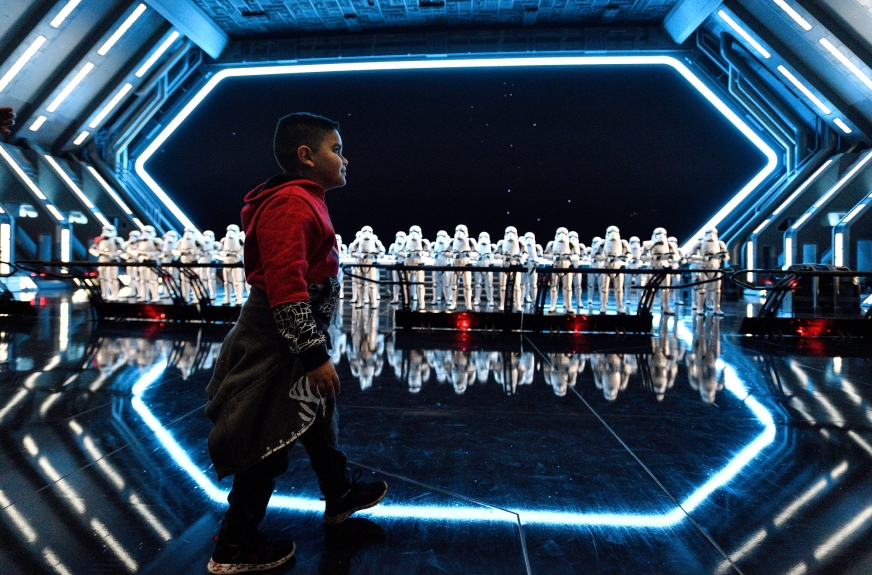 Disneyland visitors will need to keep their credit cards handy now that they can pay their way to the front of the line on Rise of the Resistance, Web Slingers and many of the other popular rides at the Anaheim theme park.

Disneyland announced the 19 Genie+ front-of-the-line rides and three pay-to-ride individual Lightning Lane attractions that will be available through the new Disney Genie mobile app when it launches this fall.

The Disney Genie app will debut Oct. 19 at Walt Disney World’s four Florida theme parks. A launch date for the Genie app at Disneyland and Disney California Adventure will be announced very soon, according to Disney officials. Expect the West Coast version of the Genie service to roll out as part of the existing Disneyland app sometime between late October and late December.

Disneyland visitors won’t be required to use the Genie service, but the digital planning tool will become an essential part of any visit to the parks.

Disney’s new personal assistant app will be divided into three parts — the free Disney Genie itinerary planning feature; the $20 Disney Genie+ replacement for the former free FastPass and paid MaxPass line-cutting perks; and the individual Lightning Lane option that charges $7 to $15 to jump to the front of the line on the most popular rides.

The $20 Disney Genie+ service is essentially identical to the $20 MaxPass that Disneyland and Disney California Adventure have offered since 2017. Free FastPasses will become part of Disneyland history once the paid Genie+ replacement launches.

Disneyland will have only one individual Lightning Lane attraction at launch: Rise of the Resistance in Star Wars: Galaxy’s Edge.

The individual Lightning Lane attractions at Disney California Adventure will be the new Web Slingers: Spider-Man Adventure in Avengers Campus and the crowd favorite Radiator Springs Racers in Cars Land.

Disneyland and DCA visitors will be able to select up to two individual Lightning Lane attractions per day. And no, you can’t choose Rise of the Resistance twice per day — even if you want to.

Disneyland’s website is careful to mention that the 19 attractions on the Genie+ list will be part of the paid front-of-the-line service “at launch.”

Walt Disney World resort has twice as many parks as the Disneyland resort and 46 attractions on its Genie+ list — providing a glimpse of what the future could hold for Disney’s California parks.

Six Disneyland attractions not currently on the Genie+ list make the Disney World lineup: Jungle Cruise, Pirates of the Caribbean, Peter Pan’s Flight, Mad Tea Party, Dumbo the Flying Elephant and the Many Adventures of Winnie the Pooh.

Two other Genie+ attractions at Disney’s Hollywood Studios have DCA parallels: Alien Swirling Saucers is a clone of Mater’s Junkyard Jamboree and “Beauty and the Beast Live on Stage” is the Broadway-style equivalent of “Frozen Live at the Hyperion.”

Two nighttime spectaculars — “Fantasmic” at Disneyland and “World of Color” at DCA — used be part of the former FastPass options. They could show up again as Genie+ options once they return from their extended pandemic hibernation.

The Magic Kingdom has an interesting individual Lightning Lane ride that could be a possible Disneyland candidate in the interim: Space Mountain. Another option could be the revamped Splash Mountain once the classic log flume ride gets a “Princess and the Frog” makeover.

What happens if you don’t upgrade to Genie+ and the individual Lightning Lane options? Then you’re at the mercy of the standby and single rider lines — which will still exist.