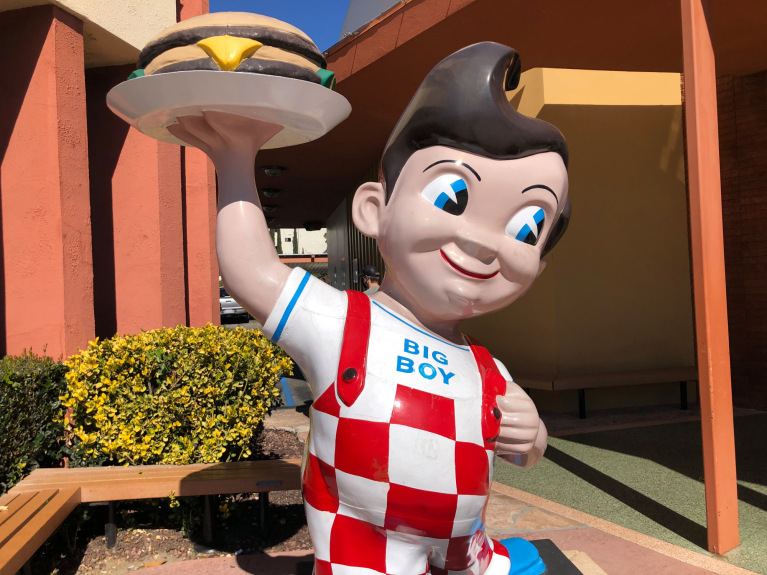 Even though restaurants are reopening for indoor dining — for the moment, at least — I’m still happy to do much of my eating on outdoor patios created on sidewalks, patios formerly used only for cocktails, and in parking lots, where the car spaces are diminished, so the number of diners can be increased.

It’s in that context that I must pay homage to the Bob’s Big Boy on Riverside in Burbank/Toluca Lake. That … and the fact that I love eating at iconic restaurants that have withstood the test of time. Bob’s dates back to 1936. And hereabouts, that’s downright prehistoric!

The original link in this chain (there are nearly 200 in the U.S., and nearly 300 in Japan, where the burgers are not served on buns!) was born Bob’s Pantry in Glendale, opened by pioneering restaurateur Bob Wian. As the number of Big Boys proliferated, ownership moved from one company to another. But what remained the same, sort of, was the Big Boy logo. I say “sort of” because the well-fed Big Boy, with his pompadour hairdo and red-and-white checkered overalls, also has changed over the years. (You can find a comprehensive page of Big Boys through the years on — what else? — Wikipedia.)

And indeed, it’s the Big Boy who greets you at the entrance to this Bob’s, over a plaque naming the restaurant a “State of California Point of Historical Interest.” And so, in my terms, is the food. Which has undoubtedly changed over the years — but still feels like a happy culinary relic from a more innocent time.

The dining area in the parking lot is spacious and well shaded from the sun; it has a feeling of being built to stay as an alternative, even when our restaurants have fully reopened.

Honestly, it’s been a while since I’ve dined with the Big Boy. My recollection of Bob’s are the burgers. Or to be more specific, that it’s (as the menu tells us) home to the “Original Big Boy Combo: The original double-deck hamburger with two ‘never frozen’ burgers, lettuce, cheese, mayo and our special red relish.” The lettuce is shredded — shredded lettuce is everywhere on the menu. This is not where you go for arugula and radicchio. Add on “Bob’s Famous Onion Rings” or french fries, and you’ve got a meal that approaches nostalgic perfection. It also comes “super” for a buck twenty more — a “slightly bigger burger and twice the amount of cheese.”

And as a restaurant built around its burgers, there is, of course, more: a bleu cheese burger, turkey burger, pastrami burger, bacon cheeseburger, patty melt, an “All American,” and both a veggie burger and a vegan burger — “prepared on a surface not used for proteins.”

This is not the sort of burger raised to the level of sublimity found at newer icons like Umami Burger, Shake Shack and Slater’s 50/50. This is the sort of burger we used to eat on family trips, when we’d stop at much-loved roadhouses for the chow my parents never cooked at home. This is a Classic American Burger, of modest size (despite its descriptives) and modest ingredients. A taste of how we used to eat. And how most of us still eat.

What I had forgotten was that Bob’s isn’t about just the burgers. There are quesadillas listed among “Starters” — both a veggie quesadilla and a barbecue quesadilla, neither of which were on the menu back in 1936. There are more sandwiches here than burgers. A good selection of salads, and some “Entrees,” which include a center-cut top sirloin, a steak and fried shrimp combo, a fish and shrimp dinner, fish and chips, chicken parmigiana, chicken fried steak and spaghetti marinara. They all come with a dinner salad or soup, and a choice of spuds and veggies. The pastas come with garlic toast.

And of course there’s Pappy Parker’s Fried Chicken, which comes in the morning on a hot waffle — a meal so Middle American it leaves me wondering exactly where I am. And since Bob’s is a three-meal-a-day restaurant, with a sizable breakfast menu that includes a “big” ham steak and eggs, a 12-ounce Delmonico steak with eggs, a country fried steak with eggs, and corned beef hash with eggs, that sense of Middle America grows even stronger.

Add on hash browns or home fries, toast or a biscuit with gravy, and it’s easy to see why Bob’s has grown like the Big Boy, spreading across the land. (Notably missing are grits, which would bring the chain to a Middle American singularity!)

My biggest surprise has to be the presence of a quartet of salads on the menu. For although this is a California-born-and-raised restaurant, it feels like it came from the days before we became a culture obsessed with our greens. There’s a “Classic Cobb” and a Fiesta Salad, a chicken Caesar and a “strawberry chicken salad” — which I intend to order someday…I guess.

Last time I was there, with the fantasy of losing a few ounces, I went with the Cobb, which was of the bigger chop persuasion. It came with a whole hard-boiled egg. The sliced avocado was a tad riper than it had to be. But the salad was perfectly good — and outlandishly big, a lot of salad for $13.99.

Feeling a bit deprived of the Bob’s experience, I also ordered a burger. It was as I remember it being — not fancy, but certainly tasty enough, and filling. There’s a lot of history here. You can taste it in (most) every bite.