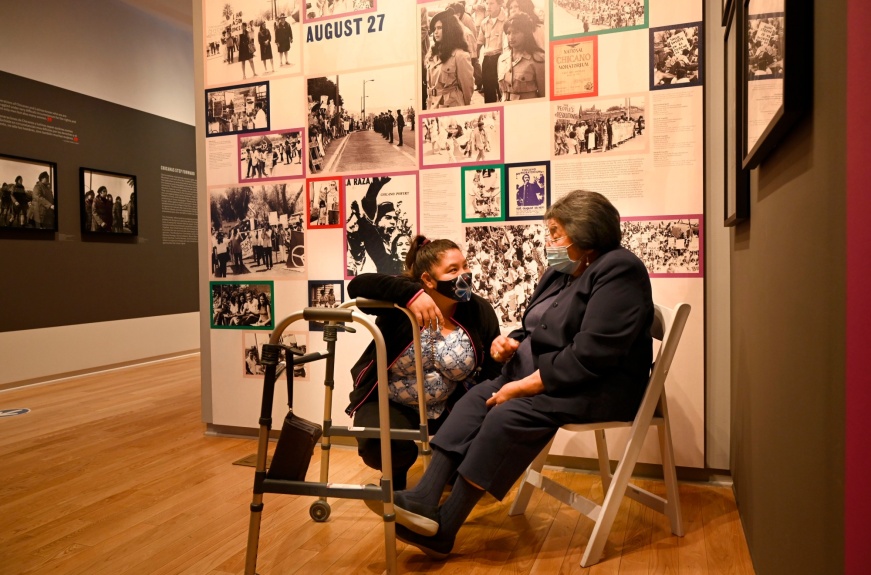 It’s been more than 50 years since that day, but Irene Tovar recalls her frantic search for friends and family in the aftermath of a Vietnam War protest in East Los Angeles that she helped organize.

It was Aug. 29, 1970, a day when more than 30,000 Latinos protested against the Vietnam War along Whittier Boulevard before gathering at what was then known as Laguna Park.

“It was a family protest. We invited our grandmothers and parents to come with our little brothers and sisters and we all marched. There was no violence in the route. People were in the park seated, hearing the speakers and the music and then all hell broke loose,” the now 83-year-old Mission Hills resident recalled.

That protest, known as the National Chicano Moratorium, and other events leading up to that day, are the focus of a new exhibition titled “Patriotism in Conflict: Fighting for Country and Comunidad,” which opens Nov. 5 and runs through June 19 at La Plaza de Cultura y Artes in downtown L.A. The exhibit also includes contributions made by Latinos who served in the military dating back to World War II.

“We had more than 30,000 people organize, mobilize and protest to end the war and to bring Chicano men back to the United States and to also advocate for civil rights, education and political representation,” said Esperanza Sanchez, the exhibition’s curator.

“It was a very peaceful protest,” Sanchez said.

But the peaceful protest later turned violent after police responded to a disturbance reported by shop owners at a nearby liquor store and then confronted protesters at the park.

“The Sheriff started to push people out (of the park) and started to beat them up. A lot of people were scared and started either fighting back or running away. They were tear-gassed, hit by police,” Sanchez said.

Learning from the past

The exhibition, which is made up of about 300 items including pictures, posters, flyers, artwork and personal items from Latino military members, was supposed to open last summer at the cultural center to mark the 50th anniversary of the Moratorium. It was delayed due to the coronavirus pandemic.

And while it focuses on the Moratorium and events that led up to Aug. 29, it also looks at the larger story of patriotism in the Chicano community from their participation in World War II up to the Chicano Moratorium, Sanchez said.

The exhibition begins by highlighting the contributions of Latinos in the military and their patriotism by displaying personal things such as a stack of handwritten letters sent from soldiers, with some dating back to World War II.

Also on display is a Purple Heart as well as other medals awarded to Latino soldiers and a photo album from a soldier serving in Vietnam.

The exhibition then focuses heavily on photographs that include images of walkouts at local high schools in protest of the war, as well as photos of female members of the Brown Berets protesting the Vietnam War in East L.A. in December of 1969. It’s described in the exhibition as the first Chicano moratorium against the war.

Dressed in skirts, military-style jackets and berets, the photo shows the women marching in a straight line during the protest which included more than 1,000 people rallying against the war.

“A lot of these women were the ones mobilizing everyone,” Sanchez said.

Other walls in the exhibition space are filled with black and white photographs of the Aug. 29 protest.

One picture shows a massive crowd on Whittier Boulevard holding up signs, another shows a woman dressed in all white holding her young daughter’s hand.

Yet others show the aftermath of the violence that followed with images of protesters showing the wounds they received that day, which included bloody legs and bruised torsos and arms.

Salazar, who was killed at the Silver Dollar Bar & Cafe when he was reporting on the protest after a tear gas projectile fired by sheriffs struck him in the head, is featured prominently in the exhibit  There are multiple art pieces, including a colorful acrylic painting of the journalist, who became a martyr for the movement after his death.

And for Tovar, the exhibition isn’t only a lens to the past, it’s also a lesson for future generations.

“This represents what I lived through and I’m so glad we’re remembering what happened during that time,” Tovar said.  “I really believe that if you don’t know your history you’re condemned to repeat it and I think our community should recognize what many people did on behalf of their children,” she added.

Patriotism in Conflict: Fighting for Country and Comunidad

COVID-19 protocols: Proof of vaccination or negative test and masks must be worn indoors.