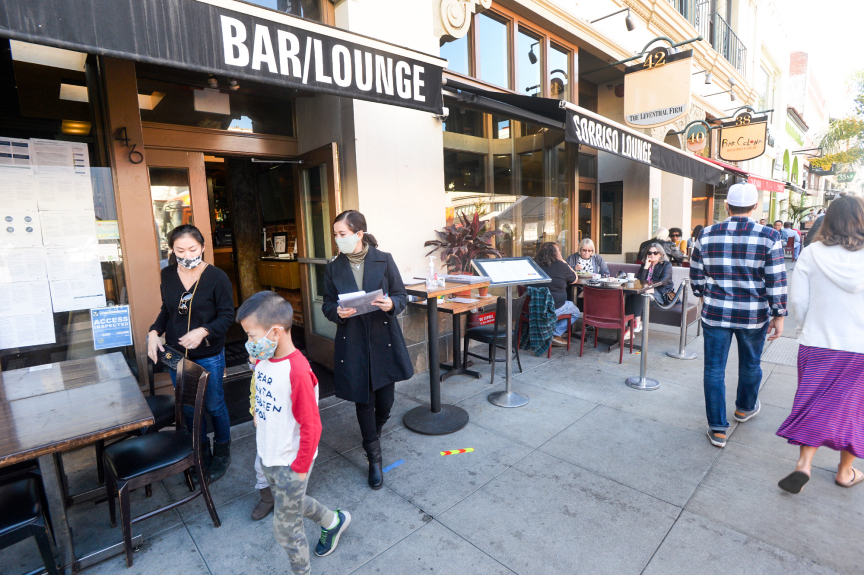 Pasadena restaurants were given a lifeline this week when city officials veered away from Los Angeles County’s three-week outdoor dining ban and chose, instead, to allow their restaurants to continue serving guests outside.

However, with that privilege came increased responsibility to follow strict protocols for the health and safety of guests. By Saturday morning, five restaurants had been closed down for not adhering to established COVID-19 protocols, city spokeswoman Lisa Derderian said.

Those restaurants, which were given prior warnings, saw their health permits suspended, meaning their kitchens were completely closed until they pass a re-inspection, Derderian said.

Violations included employees not wearing face shields over masks, barriers not in place separating hosts from guests, and tables placed too close together. In some cases, tables were inside when they were told they needed to be moved outside, Derderian said. There also were crowds gathered in front of restaurants.

This week, the city held a webinar with more than 100 restaurant owners to reiterate the heightened enforcement, Derderian said.

The city has not publicly named the restaurants that were shut down, she said, but their owners will have a hearing with city officials by Monday.

“It’s pretty immediate,” she said of the closures. “Staff is affected and some of these restaurants have 30 to 40 employees, so it’s a big hit.”

If the restaurants pass re-inspection, she added, they can open back up as soon as they have the staffing in place to do so.

The news didn’t deter some restaurant owners, who maintain the increased inspections are a necessary procedure in exchange for allowing outdoor dining.

“The city went out of its way to allow us to open and I’m sure there’s a lot of pressure on their side,” said Jack Huang, who has owned Sorisso Bar-Celona since 2000. “Granted there will be people who don’t take it as seriously, we know we’re going to do the right thing.”

Huang’s restaurant was not among the five shut down, but upon hearing the news, he immediately sent messages to his management staff to let them know the city was serious.

News of the city’s plan to keep its restaurants open for patio dining brought a swell to the eateries Friday, a day where most go Black Friday shopping and eat Thanksgiving leftovers, Huang said.

“The whole town felt like the day before the Rose Parade, there were so many people around,” he said.

Other owners also were thankful that the city was enforcing the rules at individual restaurants rather than shutting down all of them.

“The people who should be penalized are the ones not following the protocol, not the ones who are,” said Gregg Smith, who owns three Pasadena restaurants. “A lot of us have spent a lot of money on the outdoor dining.”

Gregg Smith, who co-owns Arroyo Chop House, Smitty’s and Parkway Grill in Pasadena, said owners were all working together to be diligent about following the CDC protocols.

Derderian said some owners were self-policing others to make sure they were in compliance and following a state order to close by 10 p.m. Smith said he was taking part in the self-policing group.

“It’s only to the benefit of our guests and of our staff trying to keep them employed,” he said.

In addition to increased enforcement at restaurants, Derderian said enforcement will be stepped up at businesses, parks and other areas of potential gatherings to ensure compliance with health orders.

“We’ve tried to gain compliance through education for a while now,” she said. “Seeing how the COVID numbers are increasing significantly, we have to balance health and safety of the community with economic impact.”