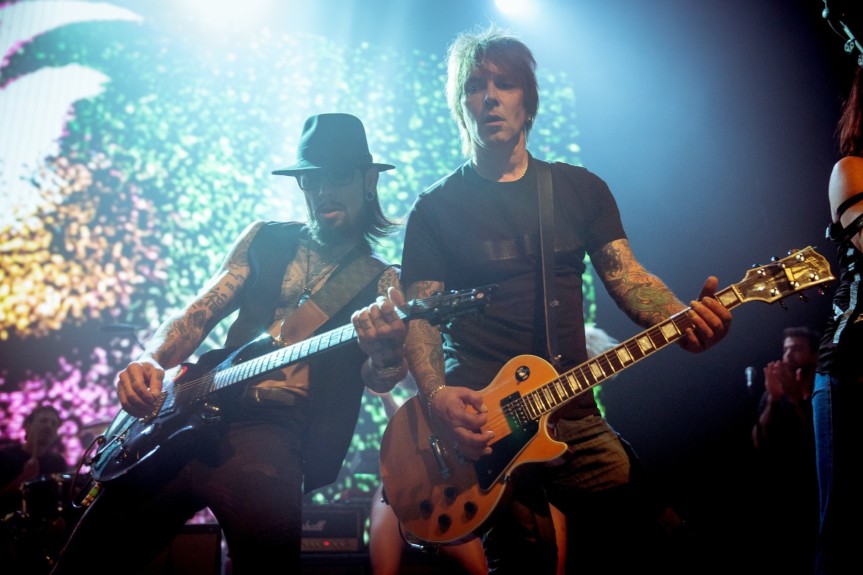 The show, dubbed Above Ground, didn’t take place in 2020 due to the COVID-19 pandemic, but will resume for its third installment on Monday, Dec. 20 at the Fonda Theatre in Los Angeles. It will feature a slew of special guest musicians including Slipknot frontman Corey Taylor, Foo Fighters drummer Taylor Hawkins, Sugar Ray’s Mark McGrath, Jane’s Addiction’s Perry Farrell, singer Etty Lau Farrell, rocker Idol and guitarist Steve Stevens and more.

“It’s actually quite a different experience than our day jobs,” Morrison added during the same video call. “This kind of show is so different in terms of production, and when Dave said we’ve fallen in love with the work, it’s because it’s not showing up and playing ‘Jane Says’ or ‘Rebel Yell.’ We can do that with our eyes closed, but we have to really work at this show.”

Sticking with the tradition of choosing influential musical releases from two acts — one American act and one British — for the evening, the performers will be covering all of the songs in order from Lou Reed’s 1972 album “Transformer” and The Sex Pistols’ 1977 release “Never Mind the Bollocks, Here’s The Sex Pistols.”

In 2018, the artists on the “Above Ground” line-up performed 1980’s “Kings of the Wild Frontier” by Adam and the Ants and the 1967 self-titled album by The Velvet Underground and Nico. In 2019, they tackled David Bowie’s 1972 “The Rise and Fall of Ziggy Stardust and the Spiders from Mars” and the Stooge’s 1969 self-titled debut album.

“Every year, we have to deep dive into these records and find parts that we kinda maybe overlooked or missed when we were just listening to them and we’re really dissecting them and kind of getting inside the songs and doing that process is rewarding, frustrating, nerve-racking,” Navarro said.

“And fearful,” Morrison added with a laugh. “Just before this interview, we’re running through the songs for the show and going, ‘Are we doing any good? Is this all right?’”

“It’s a little scary because we choose the albums that matter to us the most,” Navarro continued. “We want to do the greatest service to those albums that we can. Therefore, there’s no harsher critics of how we sound than Billy and I. A lot of bands do covers, and Billy and I are in a cover band called Royal Machines, but for Above Ground, we tried the best we can to not just do our version of the songs, we try to do as close to how it sounds on the album as possible and that is difficult.”

Navarro said he chose Reed’s “Transformer” to perform because, “It was one of the most interesting and provocative albums I’d ever heard.”

“If you listen to the lyrical content and the messaging that Lou is talking about on that record and you think about today’s climate — but then you think about the climate when he wrote those things — it was light years ahead of its time,” he said. “He was essentially saying that these are people out living their lives and they’re OK and they are just as complete and full and whole as you or I or anybody else.”

“The greatest album of all time for me — being British and being a teenager when it came out — is ‘Never Mind the Bollocks,’” Morrison continued. “It changed my life and I’ve been very vocal about that.”

The evening’s beneficiary, MusiCares, is an organization that provides funding and resources to music industry workers, and with so many of those individuals out of work and unable to tour or create during the past 18 months, the fundraising and push to encourage talking openly about mental health is imperative, Navarro and Morrison agree.

“When we started this concept, it was pre-COVID and it was very necessary,” Morrison said. “Dave and I felt that we both have suffered trauma and mental health issues, but our ethos really is very simple and that it’s OK to ask for help. So if he and I can be very public about like, Look, we’ve been there, we asked for help and we were very fortunate to get help and we are now living loving and fulfilling lives, then so can you. That’s pre-COVID. Imagine the world now in the state that we’re in? That message needs to be out there more than ever.”

“I don’t know how we do this,” Navarro said with a laugh. “It’s not just us. It’s everyone who comes and performs and is a part of this. Going back to the mental health of it, which is the most important aspect of it, at the end of the day, you’re looking at two ex-junkies right here. So clearly, one can get past what it is that is causing the suffering.”