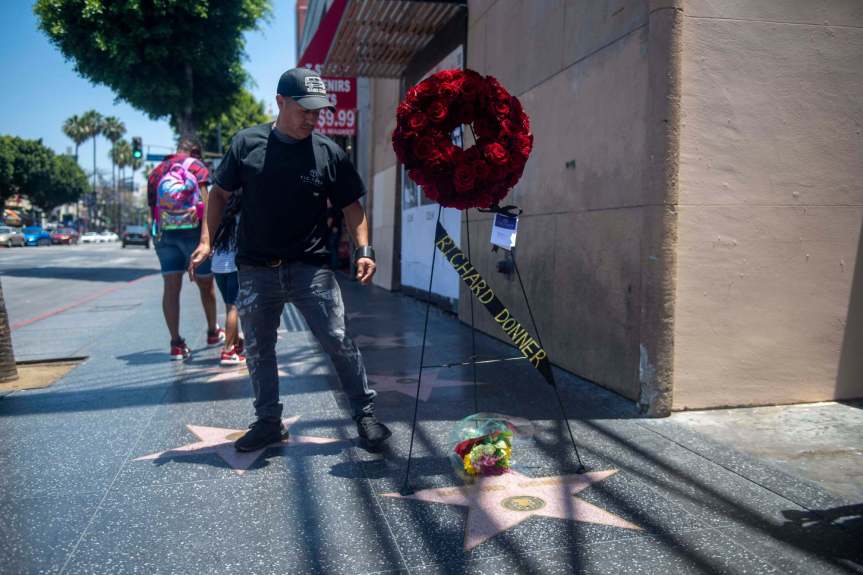 Flowers were placed on Tuesday, July 6, at the Hollywood Walk of Fame star of Richard Donner, who directed all four “Lethal Weapon” films, “Superman” and “The Goonies.”

Donner died Monday in Los Angeles at age 91. The death was announced by Donner’s family through a spokesperson for Warner Bros., which distributed many of his films. The cause of death was not released.

Born Richard Donald Schwartzberg on April 24, 1930 in the New York City borough of The Bronx, Donner initially pursued an acting career. He was cast in a bit part in a television show directed by Martin Ritt, who encouraged Donner to become a director instead and hired him as his assistant.

After moving to Los Angeles, Donner won the assignment of directing his friend Steve McQueen in episodes of the CBS western “Wanted: Dead or Alive.”

Donner later directed episodes of “The Twilight Zone,” including “Nightmare at 20,000 Feet,” which starred William Shatner as a recently released sanitarium patient who claimed to see a gremlin on the wing on the airplane he was in, “The Fugitive,” “Perry Mason,” “Get Smart” and “Gilligan’s Island.”

Donner made his film-directing debut with “X-15,” a 1961 fictionalized account of the hypersonic rocket-powered aircraft and its pilots with a cast including Charles Bronson and Mary Tyler Moore.

Donner’s next film was the 1968 comedy “Salt and Pepper” which starred Sammy Davis Jr. and Peter Lawford.

“Dick had such a powerful command of his movies and was so gifted across so many genres,” Steven Spielberg, who was among the executive producers of “The Goonies” and received a “story by” credit for the adventure comedy, said in a statement.

“Being in his circle was akin to hanging out with your favorite coach, smartest professor, fiercest motivator, most endearing friend, staunchest ally and — of course — the greatest Goonie of all.

“He was all kid. All heart. All the time. I can’t believe he’s gone but his husky, hearty laugh will stay with me forever.”

Former Warner Bros. CEO Bob Daly said at the ceremony that “everybody at Warner Bros. loved Dick because he generated such good feelings, every day when he walked around.”

“He brought that same feeling to every movie he made, a human feeling that you don’t see in a lot of movies,” Daly said. “He has a tremendous sense of humor and a very big heart.”

Donner said at the ceremony he was falling in love with the then-Lauren Shuler during the 2 1/2 years it took to get the 1985 medieval dark fantasy film “Ladyhawke” made, “but she was married.”

“Lucky for me, she and her husband decided to split,” he said. “We’ve been married 23 years, and it really gets better every day.”