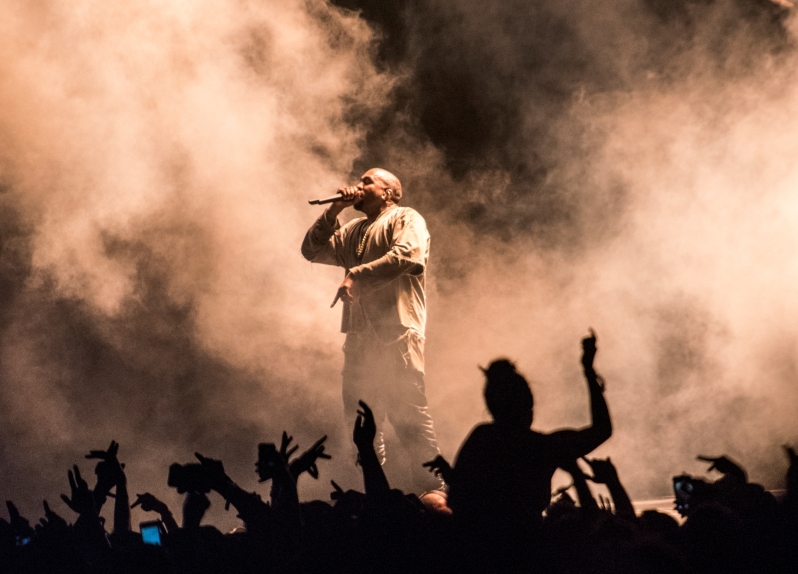 Kanye West shed his name, his marriage and his red baseball cap in the five years since he last played a proper headlining concert. He’s gone on tangents including an earnest embrace of faith, an odd Old Testament opera, and – spoiler alert – an unsuccessful presidential campaign.

But give the artist now known as Ye this much: When he chooses, he can deliver a crowd-pleasing spectacle like few others, and in front of a packed Los Angeles Memorial Coliseum on Thursday, with an assist from Drake, that’s exactly what he did.

The night opened with all the pomp and ceremony of a returning conqueror. Ye’s Sunday Service filed down the steps of backlit Coliseum peristyle, then spread to form two large crosses, singing a cappella numbers including Adele’s “Easy On Me” and Ye’s “Ultralight Beam,” the latter of which ushered Ye and Drake into the stadium.

The concert, which was livestreamed on Amazon Prime, was a benefit for Larry Hoover Sr., a former Chicago street gang leader, whose 150-200 year sentence for the 1973 slaying of a rival drug dealer has been raised by Ye, Drake and others as symbolic of the broader need of prison sentencing reforms.

The cause was also responsible for ending a long-running feud between the two hip-hop stars, who mostly performed separately, but they covered each other’s songs and joined together several times to duet.

“Praise God,” a track from Ye’s sprawling new album “Donda,” opened his night, and fans might have thought they’d be getting mostly new material.

Instead, they got what probably all had hoped for: a career-spanning set that included songs from eight of Ye’s 10 studio albums and focused heavily on his earliest hits.

“Jesus Walks” and “All Falls Down,” both from Ye’s 2004 debut, “The College Dropout,” followed the new song, and the guys rapping along with him in the aisle near mine looked like they’d experienced a religious awakening.

“Gold Digger” and “Touch The Sky,” a pair of tracks from Ye’s sophomore release, “Late Registration,” showed up next, and you probably don’t need me to tell you how well that went down.

“Gold Digger” also demonstrated just how serious Ye is about cleaning up his language. His new album is only available in a “clean” version, any swear words or racial epithets blanked out, and on “Gold Digger,” Ye changed the chorus to omit a word that had originally been there.

The production, as with any Ye show or tour, strived for something unique. Earlier in the week, aerial photos revealed a huge hill being built where the USC Trojans play their football games. That turned out to be a long white-covered hill from atop of which Ye and Drake danced and sang in view of the crowd that surrounded them on all sides.

Or, more accurately, danced and sang in view when they weren’t hidden in the massive amounts of smoke that billowed out of portals on the hill, as well as smoke fans on all sides.

It looked cool at first, and probably better still on the livestream, but around the eighth song of the night, “Black Skinhead,” which drew a huge roar of excitement from fans, it grew tiresome trying to spot the Ye amid the swirling, opaque clouds that obscured him.

“Runaway,” which featured the ad-libbed lyric, “I need you to run right back to me, more specifically, Kimberly,” a shout-out to his wife Kim Kardashian, who has filed for divorce but was at the show with the couple’s daughter North.

Ye’s set wrapped with “Can’t Tell Me Nothing,” for which he was joined by Drake, who then took over for a shorter set of his own work. Unlike Ye, Drake chose to focus on his new album, “Certified Lover Boy.”

But the energy dropped off considerably as Drake performed. Unlike Ye, who barely spoke to the audience and didn’t go off on any of the rants he’s sometimes indulged, Drake was a cheerfully chatty presence on the hill.

“I appreciate Kanye for having me here tonight,” he said, briefly forgetting Ye’s name change. “It’s important that we made this happen.”

That, by the way, was as close as either performer came to mentioning Larry Hoover’s name or the benefit’s cause during their performance, though Ye’s pants were emblazoned with the slogan “Free Hoover.” Prison sentencing reform advocate Alice Marie Johnson, who was freed from a long sentence in part due to Kim Kardashian’s lobbying, did give a powerful speech on the topic before the show began.

Drake’s set ended with “God’s Plan,” for which Ye returned to duet. The two men hugged at the finish before Ye took over for the encore.

The final run of songs included a pair of new numbers, “Hurricane” and “Come To Life,” both of which were well received. The energy in the stadium soared when Ye launched into the hit he recorded with Jay-Z.

“Bound 2,” another song with a song Kim connection — if you’ve seen the video, you know — lit the stadium with tens of thousands of cellphone lights, before Drake returned to duet on his own “Forever.”

Ye then wrapped it all up with a few words of hope for our eternal salvation, though no amount of prayer was able to save the 70,000 fans from the hellish traffic jams that awaited.