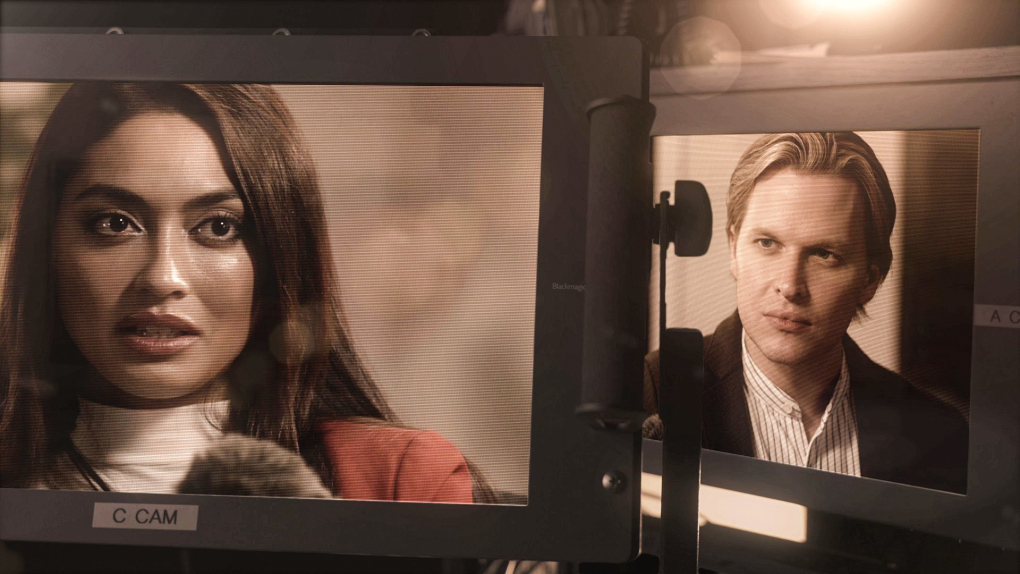 Harvey Weinstein has faced a reckoning: The disgraced movie mogul was sentenced to 23 years for rape and sexual assault in New York, though he is appealing the decision; he faces similar charges in Los Angeles.

In 2017, along with two New York Times reporters racing to break their own story, journalist Ronan Farrow broke his Weinstein investigation in the New Yorker; the work of both teams led to the producer’s conviction as well as helped spur the growth of the #MeToo movement. (The two sets of reporters shared a Pulitzer Prize for their stories.) In 2019, Farrow published “Catch and Kill,” a book on the way high-profile predators escaped justice, and a podcast of the same name.

Now comes an HBO series, “Catch and Kill: The Podcast Tapes,” and if you’re wondering what the series does that magazine articles, a book and a podcast didn’t, co-directors and producers Fenton Bailey and Randy Barbato have a quick answer for that.

“You may think you know this story,” says Bailey, co-founder with Barbato of World of Wonder Productions. “But until you look Rose McGowan, Rowena Chiu, Ambra Gutierrez, Rosanna Arquette in the eyes, that is going to be a very different experience for you.

McGowan and Arquette are actresses who were among the first to publicly tell their stories of assault by Weinstein. Chiu was an assistant in Weinstein’s London office, and Gutierrez is an Italian model who, after being groped by Weinstein, went to the New York Police Department and subsequently captured Weinstein on a wire admitting to the assault.

All of them and more were interviewed for the podcast, which in 2019 explored the difficulties of exposing Weinstein and publishing the story. They were interviewed not just on audio, but for cameras with the idea of a possible TV series in the future.

“HBO and Ronan had decided that while he was doing his podcast it would be worthwhile to sort of film his interviews, not knowing if ultimately that would be a TV series or not,” Barbato says. “And then HBO reached out to us.”

While World of Wonder’s most commercial productions include TV franchises such as “RuPaul’s Drag Race” and “Million Dollar Listing,” they also created acclaimed documentary films including the Emmy-nominated Carrie Fisher theatrical show “Wishful Drinking” for HBO.

When longtime collaborators at the cable network asked them if they were interested in making “Catch and Kill: The Podcast Tapes,” Barbato says the duo immediately said yes.

“We’re huge fans of the book and the podcast and thought that this would be an incredible creative challenge,” he says. “And obviously, the story is so important. So any opportunity to amplify it seemed worthwhile to us.”

Transforming the podcast tapes into a TV series was straightforward in one respect — all of the subjects had sat for extensive interviews with Farrow — but difficult in the sense that the production then needed to shape those tapes and place them in an engaging visual backdrop.

“Having the interviews filmed was the most amazing thing to have,” Bailey says. “When you can actually see that person speaking you get a whole other layer. And that sense of connection with the victims was so important.

“I think Randy and I, in thinking about how to augment that, we were really careful,” he says. “We just didn’t want to step on that or get in the way or overwhelm that.”

As they worked with the tapes, Bailey says their sense of the narrative always included not just the stories of Weinstein’s victims, but the way in which he and the lawyers and private investigators working for him tried to kill the story before it went public. NBC News, where Farrow initially developed the story, ultimately told Farrow they would not air it. The New Yorker, after Farrow brought it to them, chose to publish roughly two months later.

An NBC spokeswoman, responding to the new HBO series, disputed Farrow’s version of events. The spokeswoman provided a statement the network issued in 2018, saying the network did not try to kill the Weinstein story during Farrow’s tenure at the network or after he left. The statement said that NBC did not believe Farrow’s story was ready for broadcast because no women had gone on the record to accuse Weinstein of misconduct, and only did so after he went to the New Yorker.

Bailey says the story of how the reporting moved outlets is part of the narrative.

“It’s the story of the story,” Bailey says. “We felt it was like a thriller with twists and turns.”

“I love that ink because it speaks to the way the clarity of truth gets clouded by one little drop, and it just spreads,” Bailey says.

“It was a delicate dance,” Barbato adds. “I do think a lot of it was trial and error, because like Fenton said, the No. 1 priority was to complement the voices and the storytelling and not to overwhelm it. At the end of the day, it was all about supporting the voices.”

While the HBO series closely follows the structure of six of the 10 episodes of the podcast, several that focused on other alleged predators who also used power and money to kill stories about them are not represented.

“It’s such a singular narrative in terms of being the story about Harvey Weinstein, we wanted to keep that focus,” Bailey says.

Instead, it’s other people — the women who were assaulted; the NBC producer who worked with Farrow, and later resigned after the story was killed; the Weinstein investigator who later became a Farrow ally — that the show shines its brightest spotlights on.

“You realize that institutions and corporations, even ones that are set up to protect us like the police or the justice system, they all are subject to inertia,” he says. “Actually, it’s the individual whistleblower, the individual reporter, sticking to their guns that get stories told.”