Virus in 2020 kept Ports of LA, Long Beach pivoting to keep pace with the unexpected 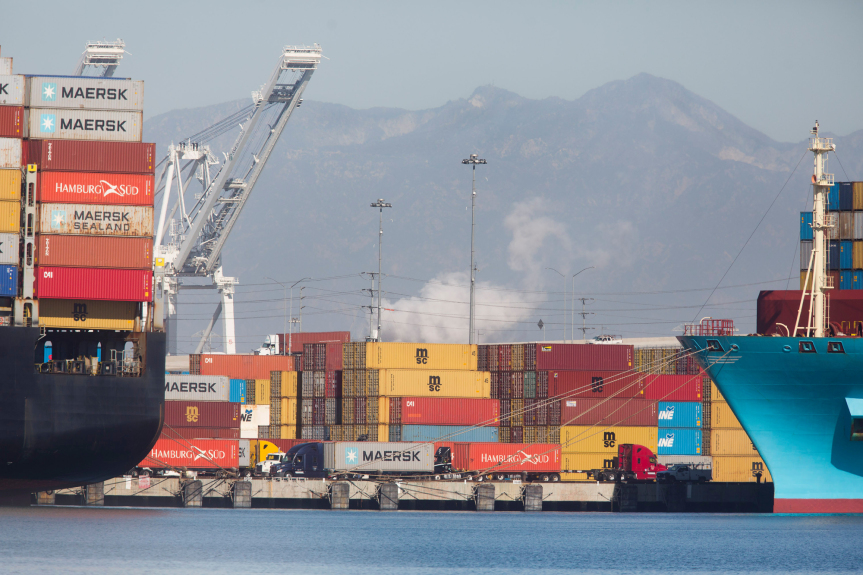 If the Ports of Los Angeles and Long Beach learned anything over the past year, it’s this:

They need to be nimble.

That lesson came courtesy of the coronavirus pandemic. The uncertainty of 2020, while a universal experience, created, in the context of global trade, dual narratives at the nation’s largest port complex – with the first half of the year marked by a cargo famine and the second half a shipping frenzy.

The snap turnaround challenged both ports to adapt and pivot. But some of those changes, such as real-time cargo tracking apps, will likely not be temporary tweaks based on the whims of an unpredictable virus.

Despite Tuesday, March 16, being the one-year anniversary of Los Angeles County’s first coronavirus stay-at-home order – which Port of LA Executive Director Gene Seroka marked during a briefing by saying there is now a mood of “collective optimism” – the teachings of 2020 remain at the forefront.

Going forward, both port directors have said, the LA and Long Beach trade hubs must be more flexible, develop a more robust 24/7 operation – and be ready for the next crisis.

“It’s been a year for lessons learned,” said Mario Cordero, executive director of the Port of Long Beach.

“The port,” he said recently, “needs to be able to scale up and down and be more agile.”

The Dickensian dichotomy the twin ports endured in 2020 is a narrative best told via statistics.

But officials with the Ports of Los Angeles and Long Beach weren’t overly alarmed at first.

For one, the Lunar New Year was around then and factories in China typically close for two weeks to celebrate, causing an annual dip in cargo numbers. There’s also the lingering trade war, which has dragged cargo numbers, to varying degrees, for years.

But as coronavirus cases spread across the globe, becoming a pandemic, the anxiety grew.

“I lived in China during SARS so I had a first-hand look,” Seroka said March 3, 2020. “We knew something was coming at us and it really was going to be big.”

And he was right.

When the February cargo numbers came in, they were down by nearly 23% from February 2019 in LA and by 9.8% in Long Beach.

At that point, though, there were only 11 confirmed coronavirus cases reported in LA County – and the worst was yet to come.

By mid-March, much of the United States was shut down.

The fallout was clear.

“We’ve seen recessions, we’ve seen 9/11, we’ve seen other events such as SARS, MERS and Ebola,” Nick Vyas, an expert in global trade at USC, told the Southern California News Group in April. “But we’ve seen nothing of the magnitude in disruption of the supply chain that COVID-19 has created.”

But when summer came, so did a surprising boom.

Spurred by an online shopping bonanza and accelerated by the traditional arrival of winter holiday goods, cargo containers flooded the ports.

July 2020 was the busiest month in the Port of Long Beach’s 109-year history, and the second-best July at the Port of LA.

In September, the ports began a string of record-breaking months.

“The early predictions were that October was going to be a slow month for us,” said longshore worker Drew Guttierez of International Longshore and Warehouse Union Local 94. “We’re halfway through it and we’re still in the fast lane.”

Things didn’t slow down during the winter, even as a deadly surge led to tighter lockdowns in California.

The Port of Long Beach broke single-month records throughout 2020’s final quarter, and in January and February this year. The Port of Los Angeles, meanwhile, has had seven consecutive record-breaking months through February.

“It was just amazing,” Cordero said during his recent address on the state of the Port of Long Beach. “After a dire first half of the year, cargo came roaring back.”

And there are no signs of a slowdown.

“All indications point toward a strong flow of imports over the next few months,” Seroka said in a written statement last month, “as consumers continue an unprecedented buying surge which began last summer.”

But the cargo seesaw the ports found themselves on last year had consequences throughout the supply chain – and officials had to move fast to adapt.

Ships disappear, then pile up

The first-half slump led, unsurprisingly, to fewer ships docking at the ports.

But because imports far outpace exports, the bulk of ships that leave the LA area carry empty containers back to Asia — where workers there will fill them with goods once more.

So, with fewer ships arriving, those empty containers had nowhere to go.

The build up threw into relief critical, long-term challenges the LA and Long Beach ports face, including the consequences of the lingering trade war, which has widened the import-export imbalance with China.

“What we’re experiencing is one-way trade,” Seroka said last month, “which has created challenges for the entire supply chain.”

But that build up was nothing compared to what would come.

Because as cargo surged in 2020’s second half, so did the arrival of container ships.

Early estimates, according to the Port of Long Beach, show that unscheduled ship arrivals in the last six months of the year more than quadrupled compared to 2019.

That caused a logjam.

By early February, anchor wait times had climbed to eight days on average. And on Feb. 17, the twin complex had 13 vessels either docked or at anchor – tying a record that had been set the day before.

That left a long line of ships visible along the Southern California coast.

To help solve the logjam, the Port of Los Angeles launched last month an incentive program to urge terminal operators to move trucks in and out of the docks faster and more efficiently.

The Port of Long Beach opened its Short-Term Overflow Resource Yard for containers and launched its online Wave Report, a digital dashboard to help truckers plan for cargo movements.

The Wave Report is similar to LA’s Port Optimizer, which launched in September and digitally tracks cargo movements.

While those initiatives had been in the planning before the pandemic, the cargo surge underscored how important it is to quicken the movement of goods.

“We have to be realists and with 62 ships at anchor,” Seroka said in February, “we’ve got to do something different.”

But the logjam, officials say, will likely last into the summer, with Seroka adding that the “goal is to keep chipping away at this.”

A major challenge, though, is having enough workers.

Managing the large number of dockworkers proved to be one of the most complicated tasks for port officials.

That’s because, while cargo lagged early in 2020, longshore workers had to help move critical personal-protective equipment – all while union and port officials had to keep them safe from the coronavirus.

Longshore jobs overall declined 19% in the first five months of 2020 compared to the same period the previous year.

Despite that, the pandemic forced officials to figure out how to reduce crowding at the International Longshore and Warehouse Union dispatch hall in Wilmington, where hundreds of dockworkers gather daily to get their job assignments. The union split dispatch into two locations, according to ILWU Local 13 President Ray Familathe, increased custodial services, and set up hand-sanitizing stations at the entrances, common areas and break rooms.

The ports also rushed protocols into place, including sterilizing cargo handling and terminal equipment that required night shifts to start an hour later.

“We had to make a major decision: Should we keep the port open? The answer, of course, was yes,” Long Beach harbor commission President Frank Colonna recalled recently. “This region and the entire nation depend on us for trade and jobs.”

And, early on, medical supplies.

In April, Los Angeles Mayor Eric Garcetti tapped Seroka to ensure hospitals, first responders and local communities had the medical supplies and protective equipment they needed. Both ports were crucial in doing that.

And then came the surge.

“We kept working around the clock to keep the cargo moving and keep (store) shelves stocked,” Frank Ponce De Leon, Coast Committeeman for the ILWU, said in a recent interview.

But the ports have dealt with a staffing shortage – which has contributed to the continuing logjam. A rise in coronavirus cases is partly to blame.

Last month, Seroka said some 800 out of 15,000 longshore workers were out either because they tested positive for the coronavirus or were in quarantine after being exposed to the virus.

Since the pandemic began through Feb. 12, 853 dock workers tested positive for the virus, out of 1,400 suspected cases. And the number of cases increased in early 2021, even as overall metrics in LA County declined — with about 41% of all positive tests at the ports occurring in the first six weeks of the new year.

Longshore workers now are putting in an average of 5.5 days every week.

“All of a sudden,” Ponce De Leon said of the surge, “people were begging for a day off.”

The coronavirus pandemic, meanwhile, made bedfellows of the longshore union, the ports and terminal operators.

Ever since the Moderna and Pfizer vaccines hit the market late last year, the three groups have pooled their sizable political capital to lobby state and local officials to prioritize longshore and other supply chain workers for the vaccine.

Long Beach, which has its own health department, classified port workers as being in the food industry to allow them to get inoculated in that essential group.

And last week, the Teamsters union held an event in Carson to vaccinate port truck drivers.

“West Coast ports are facing record import volumes and need all available workers to handle this critical cargo,” Pacific Maritime Association, which represents shipping employers, said in a mid-December statement. “By prioritizing vaccinations around port workers, the government will help keep cargo flowing by ensuring we have the full and able workforce we need.”

Those efforts, however, are still ongoing.

The dual narrative of 2020 has now given way to what port officials have framed as a story of hope.

Cordero, during his State of the Port address, called 2021 a “year of recovery.”

Both ports have plans to continue various modernization efforts, many of which continued throughout 2020 – the Port of Long Beach, for example, finally opened the Gerald Desmond Replacement Bridge – and will help them remain competitive while achieving environmental goals.

The ports, for example, want all terminal cargo-handling equipment to be zero-emissions by 2030 and need to get all trucks to zero-emissions vehicles by 2035.

Another round of stimulus checks currently going out, meanwhile, could further boost consumer spending, keeping cargo flowing at record levels. And as the pandemic wanes and vaccinations return, normalcy – both culturally and economically – could return relatively soon.

“After the volatility with cargo volumes in 2020,” Cordero said in a news release in early February, “we hope to see some stability and continued economic recovery over the next year as we remain focused on attracting business and building for the future.”

Yet, the ports will also carry with them the lessons of 2020.

For whatever the next crisis brings.