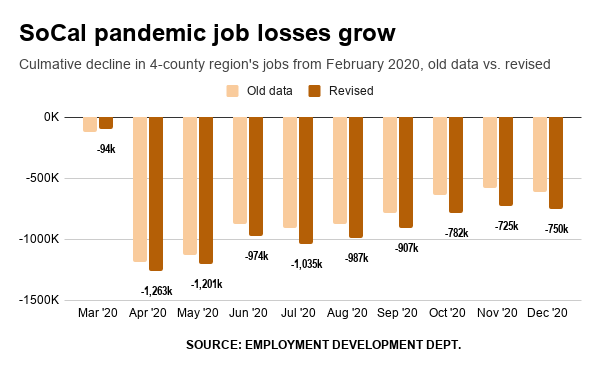 The four-county region lost an additional 137,800 positions in 2020’s last 10 months, according to an annual revision of employment data by the state. The new tally shows Southern California had 8.51 million jobs at year’s end, still 749,600 jobs shy from February’s employment total before the pandemic smacked the economy.

My trusty spreadsheet tells me these harsh employment losses were not evenly divided across the region. Los Angeles County’s revised numbers show a job drop that’s 119,900 larger than first reported, equal to 30% more cuts. Orange County’s dip was 33,500 larger — a 27% jump in job losses. But in Riverside and San Bernardino counties, new data shows job losses were 15,600 smaller than previously reported — a 17% improvement.

Large revisions to jobs data are nothing new, but the scope is stunning. And to be fair to job counters, the pandemic posed added challenges in surveying employers and households, which are the backbone of data tallied monthly. Revised stats are largely based on employers’ unemployment insurance filings, which are viewed as a more reliable, but slower, count.

What the fresh figures depict is an even wilder employment roller coaster in 2020.

The region was clobbered by an initial economic shock as lockdowns designed to slow the coronavirus put many people out of work. The surge of layoffs hit 1.26 million workers — 74,000 more than first known.

The rebound from the springtime’s depression-like depths also was weaker than previously reported — 513,000 jobs restored or 63,800 fewer than the first glance. Simply put, 1-in-10 local jobs were gone by year’s end.

The revisions also provided strong clues about which industries were heavily altered by the pandemic economy.

In Los Angeles, government had 20,500 fewer workers in December than was first reported; professional services were off 20,000; retail had 18,000 fewer workers.

In Orange County, the revisions found 11,000 fewer business-services workers. Jobs at arts, entertainment and recreation businesses were actually down another 10,000 — meaning these “fun” enterprises lost half their workers last year.

The Inland Empire, again, had better numbers. Its 8.7% unemployment rate in December was down from 9.1% originally reported but up from 3.9% in February.

Southern California began the year with 868,200 fewer jobs than January 2020, an 11.1% drop — the biggest percentage-point dip in eight months. Los Angeles and Orange counties were both down 12%, the Inland Empire was off 7%.