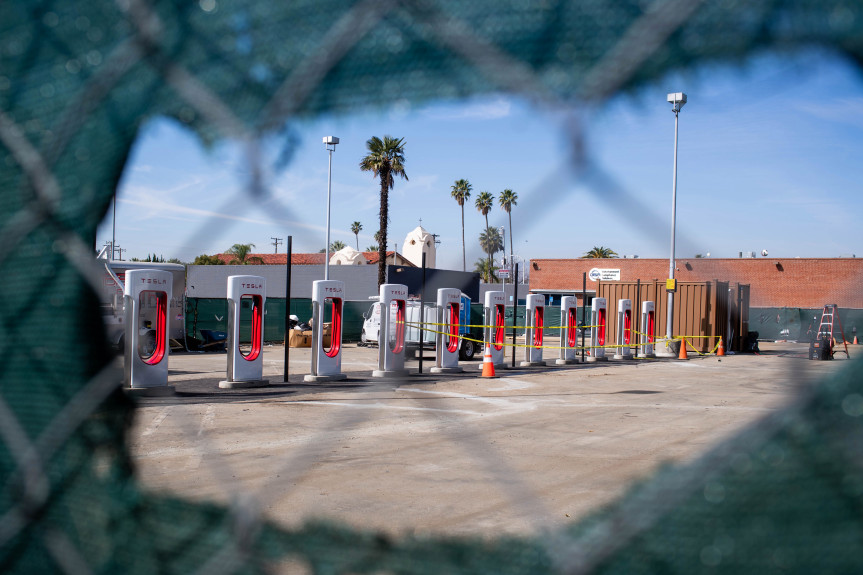 Tesla Motors will install superchargers in the city of San Fernando, expanding its network of thousands of stations strategically placed near major freeways.

Fourteen Tesla stations will sit on a parking lot in the downtown area, allowing customers to charge their cars while strolling along the row of restaurants and bridal shops.

City officials, meanwhile, hope the project will attract visitors to the 2.5-square-mile largely Latino town of 25,000, steering the long-awaited revitalization of the area.

San Fernando’s downtown sits near several major routes, including the 5, 118, 210, and 405 freeways. The closest electric vehicle charging stations are located 15 miles away in Burbank and Granada Hills.

In August, the San Fernando City Council approved an agreement with Tesla, greenlighting the installment of supercharges in a city-owned parking lot near the corner of Celis St. and Brand Blvd. The charging points will take about 17 spots, including 14 spaces for Tesla supercharges with the rest reserved for the electrical equipment.

For years, the city has been trying to revitalize the downtown area especially since J.C.Penney department store left downtown in 2012 after anchoring the San Fernando Mall for several decades, leaving nearby family-owned businesses to scramble to attract foot traffic.

But that is expected to change, city officials say.

Recently, CVS moved into a building on San Fernando Rd. The Metropolitan Transportation Authority will soon begin construction of a light rail line that will stretch along Van Nuys Boulevard from the Orange Line to San Fernando’s downtown area.

Not everyone is on board with the project, though.

A lawsuit filed by an environmental justice group and signed by Severyn Aszkenazy — the publisher of the San Fernando Valley Sun newspaper and a real estate developer, who owns multiple properties in San Fernando, including the one adjacent to the parking lot — sought to get a temporary restraining order to halt the project. The request has been denied by the judge.

Aszkenazy said the parking lot where Tesla is building the stations is “the most valuable of the city’s opportunity sites” for redevelopment. Those sites are going to create catalytic change, he said.

“Tying it up for 10 years with the charges is an obstacle to the revitalization,” he said.

Aszkenazy said that he had no interest in redeveloping the site.

His main concern was, he said, that the community “didn’t have an opportunity to truly weigh-in.”

But City Manager Nick Kimball said after learning about businesses’ concerns, officials met with owners who could be potentially impacted.

Before Tesla came into town, officials hadn’t received any proposals to develop the parking lot, according to the city. Kimball said he believed the project wouldn’t stay in the way of any future developments.

The installment of Tesla stations is about 75% completed, he said, and is expected to launch by the end of February.