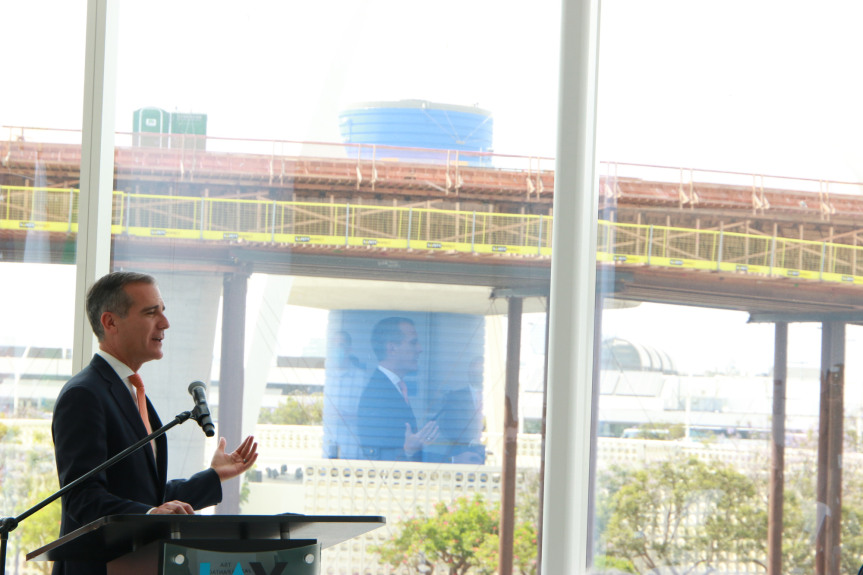 Los Angeles Mayor Eric Garcetti looked through massive floor-to-ceiling windows on the top floor of the new Terminal 1 extension at LAX on Friday, June 4, and said he was looking at the future of the airport.

Just as Garcetti and other officials cut the ribbon on the $477.5 million building Friday, workers across the way were busy constructing what will become an automated people mover train system, connecting Los Angeles International Airport to the Crenshaw Metro station and allowing travelers to get around the airport more easily.

Garcetti said he could envision the airport’s future, with the people mover gliding past the iconic LAX Theme Building, the signature structure at the center of the airport.

“Don’t worry, the Theme Building is never going away,” Garcetti said, “but look at the graceful curve around it of the people mover. You get a sense just looking at the height of it of the big work we are doing here.”

The newly dedicated terminal, meanwhile, represented the future coming closer to the present, with its clean open spaces and mid-century modern architecture. The window that Garcetti was looking through will be replaced in 2023 with a platform that connects a pedestrian bridge to the passenger train.

The Terminal 1 extension’s Friday dedication marked yet another step in an ongoing $14.5 billion capital improvement project at the airport, the biggest overhaul at LAX since the 1980s. In all, the project includes improvements to nine terminals, as well as the people mover train, a rental car facility and a 4,300 stall parking garage.

The Delta Sky Way transformation project, a $1.86 billion modernization and upgrade effort at Terminals 2 and 3, is now 18 months ahead of schedule. One of the silver linings of the coronavirus pandemic, Garcetti said, was the ability for construction to progress faster because of so little traffic to the airport over the past year.

“If it seems like a lot is happening at LAX right now, it is,” Garcetti said. “We’ve been cutting a lot of ribbons here and that won’t stop anytime soon.”

Last week, Garcetti and others dedicated the West Gates at Tom Bradley Terminal, a $1.73 billion project that added 15 gates and 750,000 square feet to the terminal.

For travelers, the upgraded terminals are meant to offer an improved experience both in terms of aesthetics and ease of travel. There are more baggage carousels and security checkpoints to make getting into and out of the airport easier, officials said.

“As the two unveilings in the past week alone have shown, we have rebuilt this airport,” Garcetti said Friday. “And we’ve done that while keeping jobs during the toughest year.”

The 283,000-square-foot Terminal 1 extension was built by the hands of nearly 3,000 workers, 31% of whom came from the local area. While multiple airlines fly out of Terminal 1, Southwest Airlines, which is celebrating its 40th anniversary of operating out of LAX, is the main one and actually oversaw construction of the extension.

Southwest Airlines Chairman and CEO Gary Kelly echoed Garcetti’s description of the new terminal building as representing an investment in the future. Southwest will begin flights from LA to Maui and Oahu on Sunday, Kelly said.

“Last year at this time, our planes were pretty much empty,” Kelly said, “and we had about $8 billion in projects and spending, but we didn’t cut this one. This terminal is absolutely magnificent and it sets the stage for future growth. That’s what it is, an investment for the future.”