Down 352,000 jobs, California restaurant owners look for a lifeline 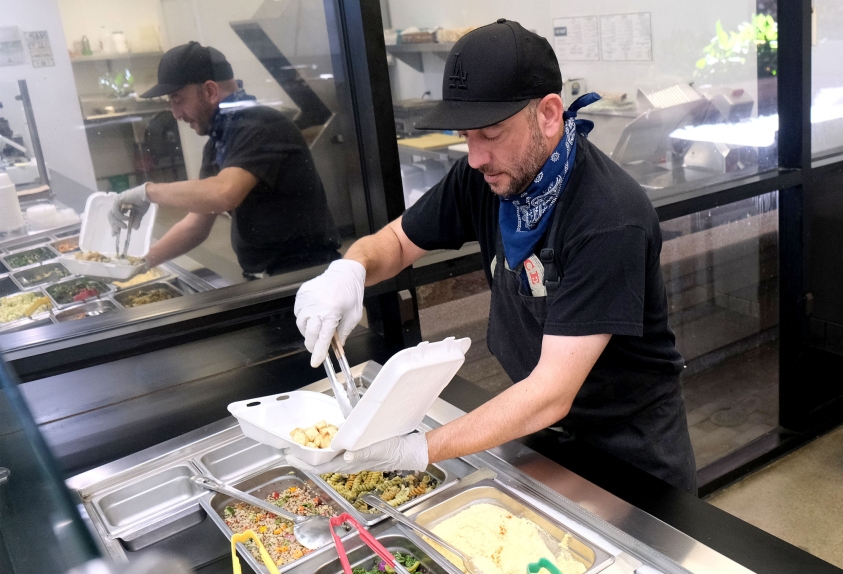 When the COVID-19 pandemic took hold in early 2020, Mike Mardoyan watched as business at his deli fell off a cliff.

The owner of Hideout Cafe, a small eatery in a Woodland Hills office building, said revenue plummeted 80%. He was able to get a $12,000 Small Business Administration loan to stay afloat, but now he’s facing a bigger challenge — hiring more workers.

He’s among a large cohort of business owners struggling to fill open positions.

Restaurant and bar employment is still down 930,500 jobs since the start of the pandemic, according to data from the Bureau of Labor Statistics. California accounts for a third of that number, off more than 352,000 industry jobs, according to Employment Development Department figures.

A federal grant program to help get businesses back on their feet ran out of money and industry groups are seeking a refill from President Joe Biden.

In California, thousands of business owners are waiting for a chance to apply.

“The unmet need is enormous,” said Sharokina Shams, a spokeswoman for the California Restaurant Association.

A plea for grant money

The Independent Restaurant Coalition is calling on the Biden administration to refill the Restaurant Revitalization Fund, an SBA program that provides emergency assistance for restaurants, bars, bakeries and wineries negatively affected by the health crisis.

Unveiled in March, the program’s initial $28.6 billion pot of money provided businesses with funding equal to their pandemic-related losses. Grant recipients could get a maximum of $10 million per business and no more than $5 million per physical location. They aren’t required to repay the money as long as it’s used no later than March 11, 2023.

Tens of thousands of businesses received grants to help them pay down debt and offer competitive wages to attract workers, but the program ran out of money in the summer.

Now 270,000 applicants who were turned away when the first round of money ran out are waiting to see if Congress will replenish the fund. Sen. Rand Paul, R-Kentucky, recently blocked a bipartisan Senate move to approve an additional $48 billion in funding, saying the money would only incentivize states to implement more pandemic restrictions.

Shams with the California Restaurant Association said 36,379 California applicants applied for help through the Restaurant Revitalization Fund. Nearly 16,000 received grants, but 20,391 did not.

“We’ve been pushing with our partner in D.C., the National Restaurant Association, for another round of funding,” she said last week.

Meanwhile, Americans are quitting their jobs in droves, further disrupting a push to fill open positions.

The Labor Department reported Tuesday, Oct. 12 that “quits” jumped to nearly 4.3 million in August, the highest on records dating back to December 2000. That’s equivalent to nearly 3% of the nation’s workforce.

When workers quit, it’s typically seen as a good sign for the job market, because people usually leave jobs for another one or they’re confident of finding new employment. But experts link much of the recent surge to fear of the delta variant.

People are leery of working in close quarters with others.

“The staffing issue is real,” Shams said. “People don’t notice that when it’s a factory or warehouse. But when it’s in retail, like a restaurant or store, they do notice.”

“My husband and I went to a restaurant recently that had a sign in the window saying they were closed after 7 p.m.,” she said. “They would normally be open till 10, but they are short-staffed.”

And many are short on funding. A recent survey from Alignable shows 51% of restaurants were unable to pay their rent in September.

Taylor Made Cuisine, an Irvine-based catering and meal-delivery business, saw demand spike during the lockdowns as people sought food delivered to the safety of home.

“We were doing 60 to 70 meal deliveries a week before the pandemic, but when it hit our business soared,” said owner Mike DeCosta. “It jumped to about 120 deliveries a week and we had to hire people to help package the food. It was a challenge.”

The small business got a $5,000 grant from the Orange County Environmental Health Division and was more recently approved for a California Small Business COVID-19 Relief Grant.

For three months, DeCosta said he’s been trying to hire two to three chefs or cooks, a dishwasher and two additional employees to help coordinate special events. But the process has been frustrating, he said.

“We’ve put job listings on ziprecruiter, indeed, craigslist … you name it. But nothing has come about. We had about 25 interviews scheduled, and sometimes they don’t even show up,” he said.

The few who do are often asking for more money.

“Chefs who had been making $15 an hour are demanding $30 an hour,” DeCosta said. “I’ve heard stories of employers paying their chefs’ salaries while they were shut down during the pandemic, and then seeing them leave when they re-opened to take other jobs for higher pay.”

Egg Plantation, a popular breakfast spot in Santa Clarita, had to lay off nearly all of its nearly 50 workers except for three during the worst of the COVID-19 pandemic and has still not returned to full staffing.

“We were really hurt by it,” Manager Kim Noice said. “We did get one grant, which helped a lot. Business is getting better as more people are getting vaccinated. We’re back up to 32 employees now.”