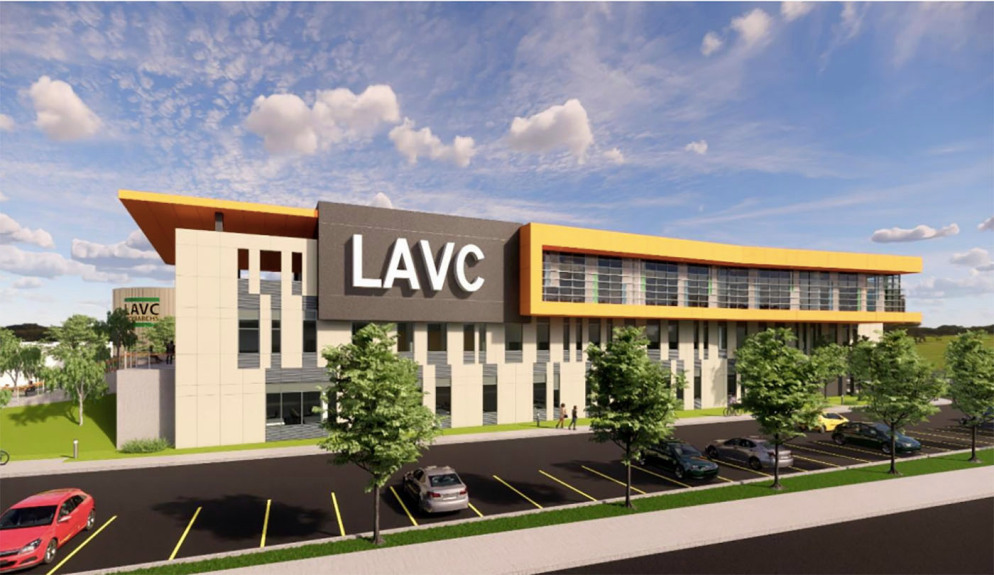 By the end of this semester, the last of several dozen iconic and some-what nostalgic bungalows on the campus of Los Angeles Valley College will be history to make way for a three-story building visible from Burbank Boulevard in Valley Glen.

The $90.5 million new construction project, paid for with taxpayer-approved bond money, got the green light on earlier this year from the Los Angeles Community College District Board of Trustees.

It’s currently in the design stage with final full approval anticipated in the early months of 2023 and completion in 2025.

At that time, the Business, Computer Science/ Information Systems, Emergency Services, Mathematics, Psychology/Statistics and Sociology/ Ethnic Studies will move into the new building, making full use of the 36 classrooms and computer labs.

Revitalization of the historic quad is also planned along with a new entrance onto the campus from Burbank Boulevard.

“Academic Complex 1 will create a modern, efficient space for collaboration and learning,” said President Barry Gribbons. “Nearly all of our classes are now at least web-enhanced, connecting students to amazing, unprecedented amounts of resources. Ensuring that our new buildings are designed for the future and being functional technologically moving massive amounts of information or data is critical.”

Although that may seem subtle in some ways, modern and instructional buildings designed and built 40- plus years ago are simply worlds apart.

“Having the spaces designed to promote collaboration between students and even departments, creates new opportunities and is an important step forward,” Gribbons said. “Of course, we also need to ensure that we design buildings like Academic Complex 1 that can be maintained well and meet current energy efficiency expectations.”

It’s obvious to the casual observer, the college has evolved since 1949 when it was located at Van Nuys High School and then reborn in dozens of bungalows placed on the current campus off Fulton Avenue in the late 1950s.

Larger, newer buildings are now interspersed among the smaller, older ones.

Demolition of the bungalows and site grading improvements began three years ago and completed June 2020, to the tune of $2.157-million.

Each was a different size.

Some had one or two classrooms or offices, others had four.

Bungalow #48-49, which had two classrooms, is the last one standing.

“They exceeded their useful life,” Gribbons said. “They were never intended to be used for 60 years.”

Academic Complex 1 will loom in the south end of the campus with dramatic features.

“Like this one,” Gribbons said as he stood and pointed at the front of the Student Union building. “Sharp angles with a dramatic overhang, bold color and pillars.”

All the departments and classes were moved from the bungalows by the summer of 2018.

The bungalows never lost their nostalgia though for the old-timers who have moved on but never forgot their Valley College bungalow experience, which was sometimes challenging.

“Anybody who attended Valley College throughout the years has likely taken a class in our infamous bungalows,” said Raul Castillo, executive director of the LAVC Foundation and an alumnus of Valley College who published ‘55 Years at Valley College, A Photo Retrospect’.” “I was a student in the 80’s and had taken a number of classes in those bungalows. Sometimes I had to take classes in the summertime and you were really lucky to have a fan in that room to cool you off. That’s been kinda of the running joke of the bungalows. They have just been there forever and they have helped address a lot of the needs at Valley College.”

The bungalows were built to last 10 years.

They accommodate many students including those returning from the Korean War who wanted to get an education under the G.I. Bill along with a fair share of graduating high school students. Notable guests who visited at that time included First Lady Eleanor Roosevelt in the late 1950s, according to Castillo.

“Those bungalows weren’t the most attractive because they were brown … an unattractive tan … on a raised foundation,” Castillo said. “(But) there’s something romantic, something fond, fond memories about that place.”

Castillo said now when he meets with former students they always ask if the bungalows still exist. They describe them as a place where they had great conversations with professors, or where they decided to pursue a specific career or degree.

“The memories are about a place that is so unattractive, but reminiscent and very romantic in bringing back memories,” Castillo said. “It’s be a constant running joke. When are they eventually going to demolish the bungalows? And, when they completed the task, we were all just looking at each other and we basically said, ‘Wow. It’s gone’.”

About 14,000 to 15,000 students are currently enrolled at Valley College, the first community college in the state and first college in the city of Los Angeles to be named a Tree Campus USA by the Arbor Day Foundation because of its forest management, engagement of staff and students in conservation goals and its park-like setting that include various varieties of trees spread over 105 acres.

Plans are in place to bump enrollment up to 20,000 by engaging college-bound high school students in college courses they can take on their respective campus or at a college campus at no cost.

Ulysses S. Grant and Jack London High schools are a few blocks away, but any LAUSD student is eligible and encouraged to take advantage of the opportunity along with those in charter schools and other public school districts.

“It’s the concurrent enrollment agreement that the state of California has sort of facilitated for how it works to do these dual enrollment scenarios,” said Steve Veres, president of the Los Angeles Community College Board of Trustees. “At our last meeting, we renewed dual-enrollment agreements with LA Unified. Usually if you take a community college class it would be out of pocket but now, we have facilitated whole classrooms of students … where the students are able to take classes on their campus.”

The rate of college-going students at LAUSD in particular has grown, according to Veres.

“These students, when they have come to us, they have persisted well and performed well,” he said. “We also surround them with … free tuition, counseling services etc. but the high school enrollment process has been an area of growth and we have (encouraged) that college-going culture. It gives students an opportunity to collect a handful of (transferrable) credits even before they step foot on campus. Real dollar savings to the students and their families.”